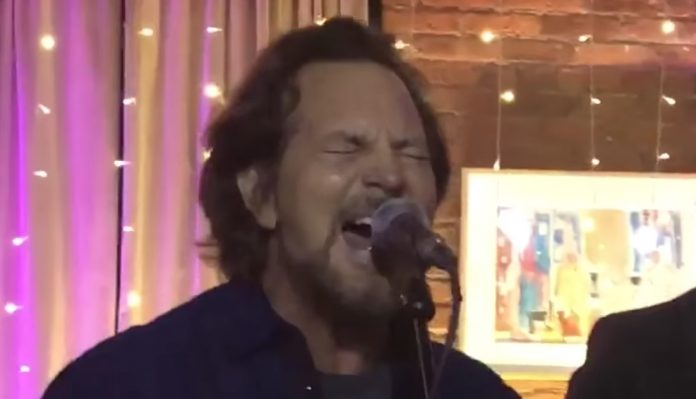 Pearl Jam frontman Eddie Vedder recently spotted a nuisance during the band’s recent show at Hallenstadion in Zürich, Switzerland. He noticed that a woman in the audience had hit another fan during the show. At the moment, the band was performing “Animal” and the woman had punched a man on his head, as he was filming the show.

Eddie Vedder got the fan ejected from the show

Eddie Vedder said at the show:

“Has it been the whole show or just now? Just now when I came over? Was it the whole time? Yeah, you’re filming everyone. The thing is, I know it upset you, but you can’t f***in’ hit him in the back of head either, even though you’re a woman. I appreciate the fact that you can be strong.”

“Quit hitting him — you’re out of here. Violence is not allowed. I’m sorry ma’am, there’s no violence allowed. You could’ve waved to me, I was lookin’ right at you. Sorry about that, it’s just not cool, we’re not hittin’ people here. Sorry.”

Pearl Jam also recently performed at Papp László Budapest Sportaréna in Budapest on Monday and they came up with a different version of “Lukin” off from the 1996’s ‘No Code’ album.

Tennis legend John McEnroe recently joined forces with Pearl Jam as the fans were thrilled at the weekend. He played guitar on a cover of Neil Young’s Rockin’ In The Free World. Sporting a Who t-shirt, McEnroe took to the stage on the first of the band’s two nights at the American Express presents BST festival, which took place in London’s Hyde Park on July 8.