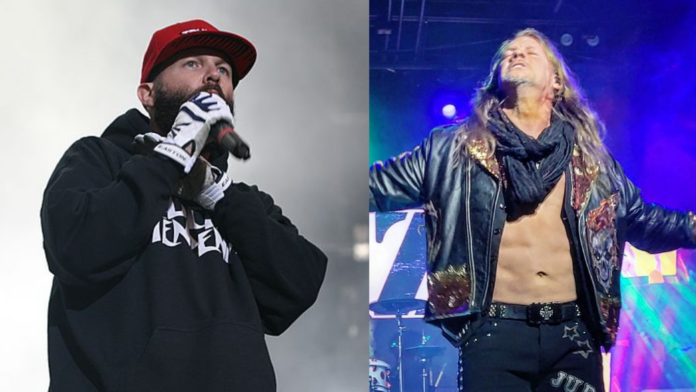 “It was certainly an interesting period. In the early part of the ’90s a lot of my wrestling career happened abroad, and the music was changing a lot in the States. Honestly, if it weren’t for Pantera, there wouldn’t have been a metal band to hang your hat on at that time. I could kinda get with grunge, but when it became the nu metal thing, I just didn’t get it. Limp Bizkit? What the hell is that? I still don’t get it.

“I was in places like Europe and Japan, though, where the bands I loved were still respected. You could still see Helloween and Dio and Maiden in arenas in Japan, for example, so I’m not sure in the early ’90s I appreciated just how hard it was for metal bands in the States. It wasn’t really until Avenged Sevenfold came along that I really found a newer metal band that I understood.”

Snot guitarist Mikey Doling recently slammed Fred Durst for agreeing to take rap artist $NOT out as one of the support acts on Limp Bizkit’s spring 2022 tour. This past March, Limp Bizkit had announced that it would return to the road in April for a month-long tour called “Still Sucks”.

It was noted that the trek was to include support by Scowl , Wargasm UK, $NOT, Dying Wish and Yung Gravy for various shows. Three days later, Doling shared a since-deleted video message on his social media in which he called out Durst — whom he referred to as a “friend” — for seemingly having approved the addition of $NOT to Limp Bizkit’s upcoming tour.

Mikey Doling opens up on the bitter relationship with Fred Durst

Doling went on to talk about the contentious relationship he shares with Durst during a new interview with Pierre Gutiérrez of Rock Talks.

He said: “What happened was that Limp Bizkit… First of all, they’re friends of Snot from 25 years ago. We were close with them. [Late Snot frontman] Lynn [Strait] and Fred Durst were buddies. Then Lynn passed away. Fred’s even on [the Lynn Strait tribute album] ‘Strait Up’. And then all these years later this rapper guy comes out calling himself $NOT. And I’m already, like, ‘Wait. What’s going on here?’ And unfortunately, time passed and we had one record; we weren’t quite big enough to fight him for that name. So I just kind of let it go ’cause it was a different genre of music — it’s hip-hop; he’s a black dude. We’re a bunch of white-boy f***ing rockers. I just thought [it was] two different worlds. And then all of sudden f***ing Limp Bizkit is taking $NOT [out on tour]. I’m, like, ‘What?’ Like, taken aback, like, ‘How dare you, Fred?’

“I would never do that,” Doling continued. “If Fred Durst had passed 25 years ago, we had had so much respect in Fred’s name. And then all of a sudden Snot is now big, and we took this rapper called Limp Bizkit on tour. That would be some disrespectful shit… But I didn’t say anything yet. But then I started getting text messages, e-mails, social media texts, IMs, ‘Hey, Snot’s going on tour with Limp Bizkit.’ So now I’m getting frustrated because I’m trying to answer [everybody], ‘No, it’s not us.’

“It’s getting really tiring. So I went on Facebook and made a post. That’s it — just a post on my personal Facebook. ‘Hey, Fred, that’s pretty fucked up you did that.’ I got mad, put my middle finger in the fucking camera — boom! It went viral from my Facebook. It goes on Blabbermouth to Loudwire to RollingStone.com — everywhere. And everybody’s calling me, like, ‘Dude, what are you starting fights with Limp Bizkit now?’ It just got blown way out of proportion.”

He was also asked if he has spoken to Fred since his social media outburst in March, Doling said:

“No, I haven’t talked to him in decades — a long time. But he knows. I’m sure he heard about what I said. He probably tells everybody he [doesn’t] care, but he knows inside that that’s f***ing bulls**t. Unless he’s just a shallow human, which he probably is. So, there you go.”