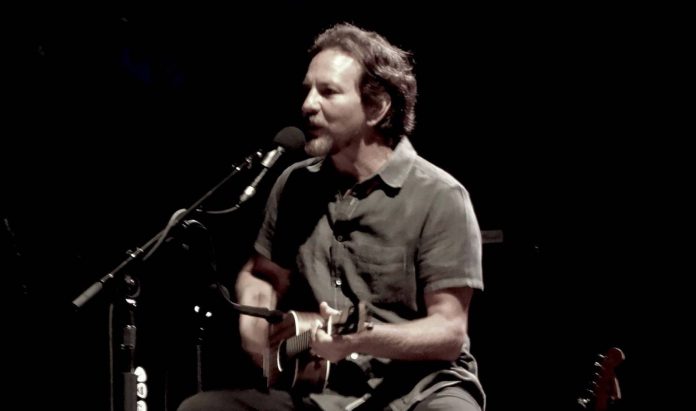 Eddie Vedder has been featured in the new documentary, ‘Inside The Lockdown Sessions’ with Stevie Nicks. It also features appearances from Miley Cyrus and Rina Sawayama. As it can be understood from the name, it is the documentary recently released to give the viewers an inside-out outlook about Elton John’s new collaborative album ‘The Lockdown Sessions’., which was released in October this year.’ Vedder and Red Hot Chili Peppers members also released a song.

The album was recorded during the COVID-19 pandemic after Elton was forced to pause his Farewell Yellow Brick Road tour due to the pandemic.

The singer took to his Instagram account and wrote the following:“Surprise! Just in time for the holidays, I’m taking you ‘Inside the Lockdown Sessions.’ Watch as I go deep into the making of my latest album with all of my collaborators, only on Apple Music.” It has been also noted recently that Vedder’s show tickets have become expensive and the prices have stunned his fans.

The three-part of Inside The Lockdown Sessions documentary is now available for free exclusively on Apple Music.

Below you can listen E-Ticket, co-wrote by Elton John with Eddie Vedder and Andrew Watt and recorded by John, Vedder and Watt with Foo Fighters’ Taylor Hawkins on drums.

The Lockdown Sessions debuted in the top 10 of the Billboard 200 albums chart, while “Cold Heart” featuring Dua Lipa saw John become the first artist to have a U.K. top 10 single in six different decades.

The 74-year-old also made history in the United States when the track debuted on the Billboard Hot 100 as John’s 68th entry on the chart and his first appearance in more than 21 years, since 2000’s “Someday Out of the Blue.”

Marilyn Manson Accused Of Being Nazi By Actress