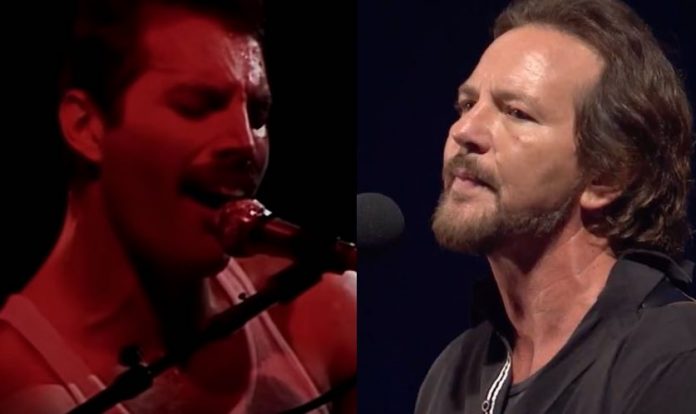 An Irish Pearl Jam fan and Queen frontman Freddie Mercury impersonator named Brian Keville, who fronts the band Qween, had his dream come true, recently meeting Pearl Jam frontman Eddie Vedder. He also later met U2 guitarist The Edge. Vedder was ‘frightened’ by how eerily Keville nailed his impression, almost falling into traffic on the street after hearing him sing.

“I’ve been a Pearl Jam fan since about 1991 so I was stunned to see him in Celbridge of all places. I quickly pulled over the car, told my girlfriend to take the keys. I said: ‘Sorry Eddie, I’ve been such a fan of yours for so long, can I get a picture.’ His wife Jill took it. I told him I was actually in a band myself, I’m Freddie Mercury in a Queen tribute band.

“He asked me to sing something and I sang ‘Day-o’ from the Live Aid concert. I nearly knocked him off his feet. He then left a voice message on my brother John’s phone. I thanked him so much and left unable to contain myself.”

Vedder discussed the meeting later on at a show.

“People started messaging me to say Eddie was talking about me. A friend sent me the video and he had put full length pictures of me as Freddie on the big screen and the two of us together. I just jumped in the car and sped to the venue. There was a crowd of people around the stage door but Glen [Hansard] came out and I managed to get his attention.

“He told me to hang on a minute and when he came back out he invited me in. He brought me back to meet Eddie and Jill again and he was like: ‘Hey Brian, you made it.’ He said he had a present for me and gave me his own branded Zippo lighter. He said it was the same one he gave to the Edge and I look over and there’s the Edge standing there.”

“Him and Jill said their daughter Harper was a huge Queen fan so they face-timed her so I could speak to her. She’s only about 11 or 12 and she was starstruck by ME. I got a huge cheer from the crowd when I walked out. It was the most amazing, surreal few days.”

Vedder said at the 3Arena gig, “Somehow he had managed to park his car in a bush and he was so cool looking and so kind and he said all these kind things and he said, ‘I’m in a group too, I’m in a Queen cover band, I’m Freddie Mercury.’ I said can you give me a little something and he sang: ‘Day-o’, he frightened me almost in to the traffic.

He said he was supposed to be coming to the gig but he couldn’t come. His name is Brian Keville, I think. Our family saw that Queen movie and we just loved it so much.”

Freddie Mercury impersonator tells how he met his hero #EddieVedder https://t.co/NojDJ7i0Mp An Irish @PearlJam fanatic has told how he met his hero EV on the street & was then left gobsmacked as the rock legend showed pictures of the moment on a giant screen in the 3Arena. pic.twitter.com/IZJHfE7rXI