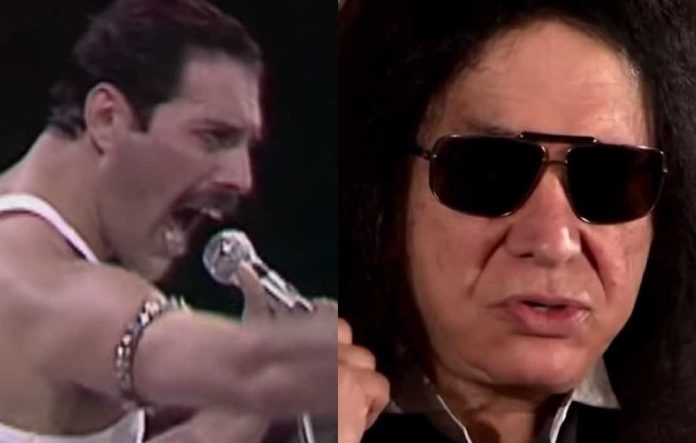 KISS icon Gene Simmons revealed that Freddie Mercury and other British rockers have given more to the world of rock and roll than Americans in a new Northern Echo interview. Queen recently made an emotional Freddie Mercury AIDS claim.

“I’m so excited. America created rock ‘n’ roll, blues, jazz and rap and all of the various types of popular music but what you have been able to do is to make it royal and all from a small area with not that many people. California has more people than your island and has the fifth biggest economy on the earth and yet other than the Beach Boys, California doesn’t have much.

You have The Beatles, The Stones, U2 and Queen and the list goes on and on. What you have given the world is so much more than the music that America has given you. So, I am so thrilled to be coming back to play in the very place that gave the world so much great music.”

Gene Simmons discussed the high prices for the KISS End of the Road tour in a new Financial Times interview.

“Unless you’re willing to live in your mother’s basement and have a job and do music as a hobby, which is wonderful, being in a touring band is big business,” Simmons told the Financial Times. “You’ll see a show out there that is as good, or better, than anything else. If you’ve got one guy with an acoustic guitar, you can charge less. We’ve got 60 people on the crew and 20 trucks and who knows how many buses, and a jet.”

“I certainly never bought into this idea of being a dumb rock musician who at some point goes, ‘Where’d all my money go?’ I’ve always believed that as talented as you may be at making money, there’s probably someone who’s just as talented at taking it. So it always made sense to me to monetize what we do. There’s a difference between being an idealist and realist, and the difference is age. The whole idea of a starving artist, or the idea someone isn’t interested in money — well, guess what, you will be when rent comes due.”

Queen guitarist Brian May wrote on Instagram on Tuesday, “You can watch the Total Solar Eclipse LIVE RIGHT NOW – from La Silla Observatory, Chile ! 💥💥💥💥💥 CLICK THE LINK IN MY BIO !!!! Join me !!! and to all my great friends in Chile and Argentina —- ENJOY !!! But protect your eyes – it only takes fraction of a second to damage your eyes forever. DO NOT TAKE THE RISK. Use an approved viewing filter until the moment of totality – and put it back on your eyes as soon as the first rays of sun reappear. Cheers – Bri”