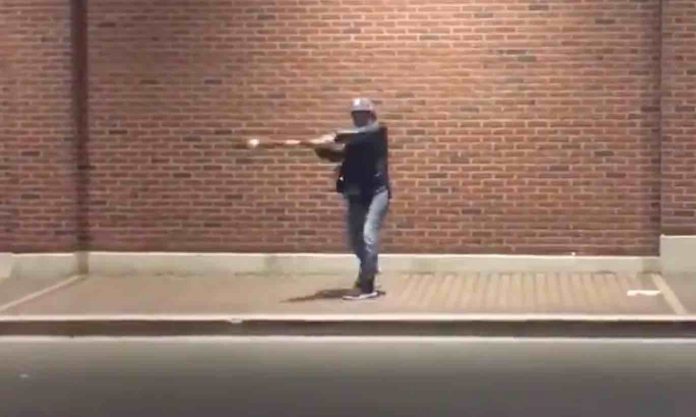 Chicago Cubs megafan and Pearl Jam frontman Eddie Vedder attended the Cubs’ Wild Card playoff game last night at Wrigley Field where they were eliminated by the Colorado Rockies in a heartbreaking 13-inning 2-1 loss. Vedder was photographed before going into Wrigley Field prior to the game in high spirits, but after the game, the Grunge icon played some street baseball to get over the loss. Vedder was filmed late at night on the street letting a fan toss him a baseball, and he hit the ball harder than most of the Cubs did last night. Someday we’ll go all the way again with Eddie Vedder hitting cleanup? Could have used him last night.

The fan who uploaded the video tweeted, “You know things didnt go well for the Cubs when Eddie Vedder had the best swing in Wrigleyville last night.” Watch the video below.

Vedder discussed his love of the Cubs in a Fox Sports TV interview with Joe Buck last year.

“I feel like the luckiest guy in the world for knowing these guys,” Vedder noted of his time with Cubs personnel like Theo Epstein and others. “It’s a pretty good home movie,” he said of the film, which mashed up the team’s World Series title with the Pearl Jam shows.

Buck asked Vedder to slot each of his bandmates into a baseball team, with Vedder dubbing himself a player/coach somewhere in the outfield. Mike McCready is in center field and the rhythm section of Jeff Ament and Matt Cameron (who Vedder called the battery of the band) will be pitcher and catcher. Stone Gossard has an infield spot.

Hey look who we just bumped into!! pic.twitter.com/yldv34IQ5x