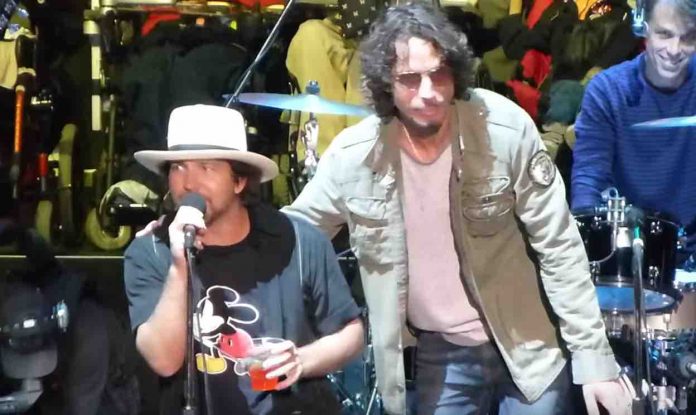 Pearl Jam frontman Eddie Vedder recently discussed his song “Brother the Cloud” during an interview with Apple Music 1 with Zane Lowe, which is a tribute to those he has lost in recent years, including Chris Cornell. The late Soundgarden guitarist had committed suicide on May 18, 2017. Tragically, his death has ruled a suicide by hanging.

During the interview, Vedder said that he has lost many near and dear ones in the last decade and Cornell was one of them. The Pearl Jam frontman said that the emotions and feelings had been suppressed for a long time and it needed a medium to express the same and thus the song helped.

“I guess those feelings, they just must have been waiting to come out or something. It just came out quick. And then by the time we got to the end of it, it was like, okay, that was something, all right. And I’ve lost a few people in different ways in the last decade.”

He believed that he might have dealt with the pain and grief but deep down inside the distress bothered him and the despair forced him to write the song:

“And apparently, just like you said, as soon as you think that you have something figured out, you’re about to find out the otherwise. Something else will come along. But this one, I guess, informed me that I hadn’t quite dealt with as much as I thought, at least in a positive way, or I still had a lot of emotions kind of under the surface. There was a fire inside my core that was still throwing, spitting magma.”

Music fans young and old cannot get enough of Eddie Vedder’s latest solo effort ‘Earthling’. Over on Amazon, one amateur review by the name of Gary Flaxman stated: To say I’m not a Pearl Jam fan would be untrue – I just didn’t get into the grunge scene at all. Other music took precedence. I saw Earthling and decided to audition some of the tracks. Every track seemed to shine and I quickly realized EV was a musician with so much more about him than grunge. There are plenty of nods to musical influences – looking at setlists it is clear EV is partial to a cover or two. There isn’t a bad track on this album. Once you get Invincible and Between The Cloud in your head you won’t get them out for days. But there is so much more here. If you like classic rock – Springsteen, RHCP and I guess Pearl Jam too this album will fit in perfectly. It’s immediately gone into my section of ‘albums I know I will play for the rest of my life and when you discover one of those it is always a great feeling.