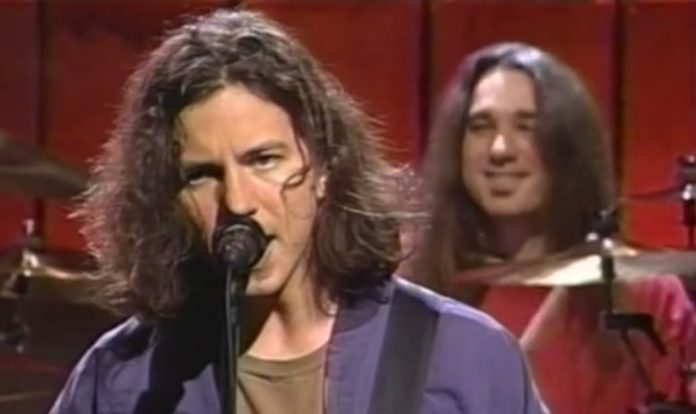 Greg Prato asked, “Besides you and Jerry joining Pearl Jam on stage for a rendition of “W.M.A.” at the Fox Theatre, were there any other standout memories of when King’s X opened for Pearl Jam in ’94?

dUg Pinnick responded, “One night I said to Eddie, ‘How are you doing?’ And he seemed really troubled. He said he felt like he just wasn’t giving enough to the audience. He felt like he needed to give more. And it was really bothering him. I told him, ‘Dude, you put all of yourself in that record. We all love what you’ve done and we come to hear you sing those songs. You don’t have to run around. You don’t have to jump off the rafters. You don’t have to be in everybody’s face. You’ve already proved yourself and your integrity. We love your songs. Sing to us.’

And that night, he walked up to the mic and never left it. He stood right in front of the mic and sang the whole night. And I cried, because he did some of the most incredible things—emotionally and physically—I’ve ever seen a person do in one spot in my life. I truly at that point realized he was a great performer.”

“I remember every night feeling like I was watching history being made. It was a true honor to be a part of something as special as what Pearl Jam had become. We had known those guys before they were Pearl Jam and to be a part of this historic event was something I’ll always be thankful for. I remember one night, Dug was to sing ‘W.M.A.’ with them, and David Abruzzese asked me to play octobans. He told me they never did this song because there was nobody to play those extra percussion parts. So he kind of told me how it went and I got up there and played along side him. It felt great! We did the encore with them and I remember walking on the stage and the ovation from the crowd was overwhelming. After the song, Eddie introduced Dug to the crowd, but never mentioned me. David stood and started shouting, ‘And goddamn Jerry Gaskill!’ Of course no one heard him, and that’s ok with me. It was just an honor to be a part of it. I also had my oldest son, Jerrimy, out with me, who was 15 at the time. He hung with the guys quite a bit. I believe Eddie would come to the bus and get Jerrimy to shoot hoops together. At the end of the tour Eddie said to me, ‘Tell Jerrimy wherever we are, he’s always welcome.’ When we got home I remember one day taking Jerrimy to school and he said, ‘You know dad, almost everybody at my school would give their right arm to do what we just did, and that’s just what we do.’ I thought that was really special as well…”