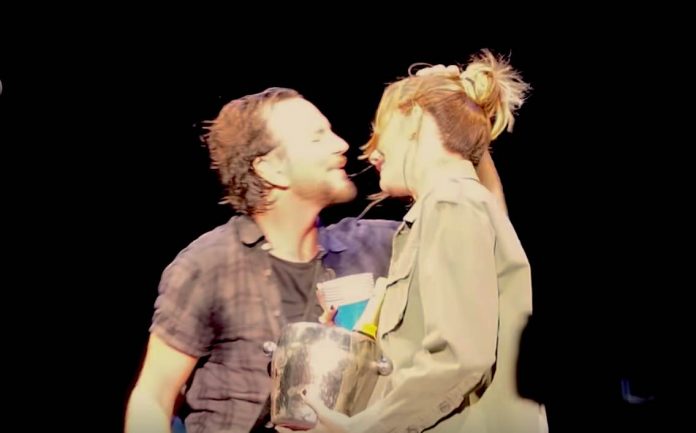 Eddie Vedder’s wife, the fabulously and gorgeous Jill Vedder, is an American philanthropist and a former fashion model who also can throw down in the gym – as can be seen here in the below Instagram post where the toned Mrs. Vedder can be seen throwing some impressive leg strikes during a recent workout. One sure-fire way to beat the winter blues! Eddie Vedder recently dropped this shocking bombshell about this Morrissey Album

Meanwhile, Vedder’s rock and roll husband is about to launch a new solo album with his band – the Earthlings, that makeup of some very recognizable names including Chad Smith and Josh Klinghoffer of the Red Hot Chili Peppers, and bassist Chris Chaney of Jane’s Addiction.

Recently in discussion with Billboard, Andrew Watt, producer, had this to say about the project. “We just had a ball together, laughing and hanging out, popping beers and making the kind of music that we all love”. “I’m so excited for everyone to hear [Earthling]. We’re just finishing up the mixes and stuff, and I’m just really excited. I don’t want to say too much besides just to hear his voice in front of me and get to play guitar and bass under that? It’s like a celebration.”

Vedder recently partied with a surprising name in these New Year’s photos. Earthling will be landing on Earth on February 11th and while it’s scheduled for pre-orders, a disclaimer note does say that due to issues in the supply chain, deluxe CD and vinyl formats won’t be able to ship until June of this year. Vedder’s nine-show tour will in addition, include stops in New York City, Newark (New Jersey), Chicago, San Diego, Los Angeles and Seattle. This would be Vedder’s first solo album since 2011’s Ukulele Songs. Stevie Wonder, Ringo Starr and Elton John will also be contributing to the album as well.