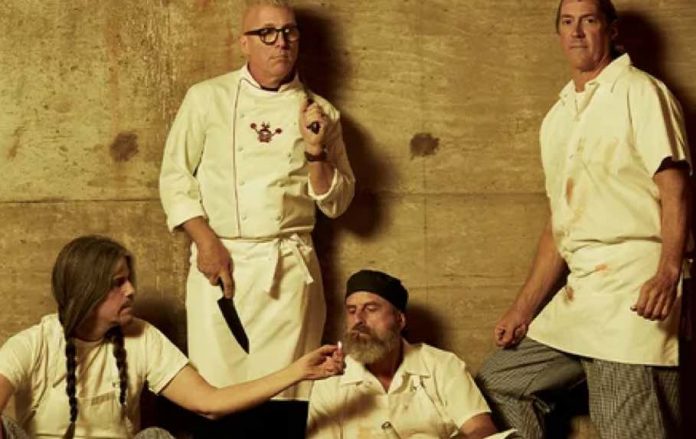 Tool has been killing it since embarking on their 2022 Fear Innoculum tour. The tour which began on January 10th in Eugene, Oregon at the Matthew Knight Arena and will conclude all the way in Budapest, Hungry at the SportAréna on May 24th. Tool recently have refused to play this popular song.

To celebrate the first leg of the tour – Tool drummer, Danny Carey requested a massive drum kit to play during shows, buying some new parts for his massive kit and surely spending big money. Joe Slaby, the drum technician for the group would take to social media via Instagram to discuss how this particular drum kit would come to be.

“I love gear as much as the next drummer, so as requested, here is Danny’s kit for the first leg of the 2022 Fear Innoculum tour. This rig is constantly evolving. But remember, it ain’t the gear, it’s the player. That said, swipe for details… Drums are Sonor SQ2 with Vintage Series “teardrop” lugs except where noted” – he would continue to give the full specifics, which can be seen in the full Instagram post below.

The stunning looking drum kit itself is something to behold, with one Instagram commenter, schaunanagins, replying on the platform: “My god. One day I will have a kit like that . I’m dying to play those mandala pads. Danny is my favorite drummer of all time.”

Meanwhile Fear Innoculum has come out to rave reviews as over on Amazon, Philosurfer had this to say this about the album. “In a weird way, this heavy, stomp-your-enemies-to-death-and-then-break-a mountain-with-your-own-hands album is their most graceful work yet. Listen to the album all the way through, and it flows together beautifully, like some alternately serene and man-eating river. Fear Inoculum is a legacy album that shows the band are not some rock relic but undisputed masters of metallic churn. And if the end of the world is nigh, at least we have the soundtrack.”