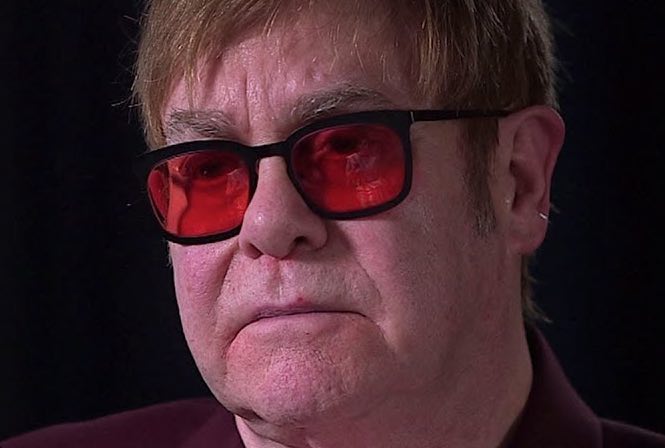 Elton John, who recently revealed this shocking royal family assault bombshell, is without a doubt one of the most legendary names in the history of rock and roll. He has achieved 35 gold and 25 platinum albums, has sold more than 250 million records worldwide, and holds the record for the world’s biggest selling single of all time. Over the five decades, since his career began in 1969, Elton has played more than 3,500 concerts worldwide.

During the beginning of his UK leg of the ‘Farewell Yellow Brick Road Tour”, Elton, who was playing at Carrow Road football stadium in Norwich, Norfolk, England announced that while he wanted to thank the crowd for their support, kindness, and memories, John wanted to make it abundantly clear that he is sticking to the game plan of retirement and retiring from touring once this current tour ends. He told the fans at the stadium the following. Credit to Towleroad for the below transcription.

“Tonight is the 229th show on the Farewell Yellow Brick Road tour, we have about 103 shows to do. It’s been quite a journey and it all ends next July. But I want to thank you because I won’t be playing here again. I want to thank you for all the memories, all the love you’ve sent me, all the loyalty, the kindness, the letters, the dressing up, the costumes, the multiple shows you’ve been to.”

Sir Elton John would conclude by also saying: “It means the world to me and I will never forget you guys.”
In other news involving Elton John, during an appearance on the Howard Stern Show that took place earlier this year, the ‘Candle in the Wind’ singer would discuss recording with Metallica to promote The Metallica Blacklist, the album which features John. Elton played on the track ‘Nothing Else Matters. Credit to Far Out Magazine for the below quote.

“I have to say, it was a no-brainer playing on this song,” Elton added. “Metallica are probably the crème de la crème of those kind of bands. You can’t define them. They’re not a heavy metal band. They’re a musical band. Their songs aren’t just heavy metal. They’re beautiful songs. This is such a melodic song — it’s f***ing great, actually.”