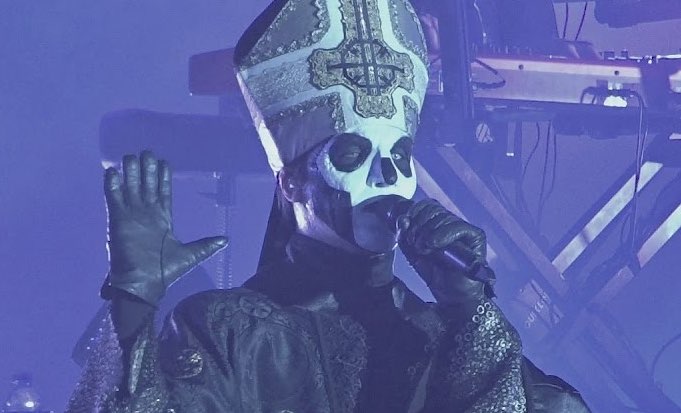 Ghost was recently performing at the French festival Hellfest on Saturday, June 18. But they had to stop the show abruptly due to frontman Tobias Forge losing his voice.

After performing the song “Dance Macabre” in Clisson, Forge told the audience: “My voice is completely f***ed. I cannot sing one other song for you.”

As a result, Ghost was unable to perform what has been the closing track of the band’s recent shows, “Square Hammer”.

Prior to Hellfest, Ghost had last performed at the final show of the group’s European headlining tour on May 18 in Budapest, Hungary.

Earlier Saturday night, Ghost performed the song “Griftwood”, from the band’s latest album “Impera”, live for the first time. The track takes aim at Donald Trump-era U.S. vice president Mike Pence who led Christian evangelicals into becoming apologists for what many believe was the most destructive president of modern times, while at the same time preaching righteousness and goodness.

“That song’s about him and anyone like him who’s willing to soil everything they’ve worked for,” Forge explained to Kerrang! magazine earlier in the year. “They definitely qualify for a front-row ticket to Hell. Which is so ironic, because that’s what they believe in. [People like that] completely demean themselves, and just eat shit out of someone’s ass in order to achieve whatever they’re trying to achieve.”

“Again, he stands as a symbol for people of all times, where the end game is wrapped with some sort of religious [thing],” Tobias continued. “He’s known as this sort of Bible thumper, believing that he has strong faith, and he’s just this awful, awful person in any way. He tries to tell the world that he serves God, that he’s part of the good side. Whereas at the end of the day, the only thing he wants is power. But it doesn’t have to necessarily be all about him. It’s about people like him: a lot of politicians, lot of preachers, a lot of clergymen throughout the history of time.”