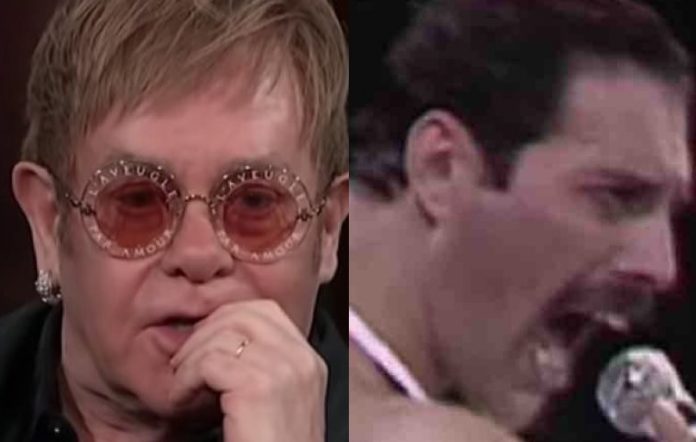 Late Queen frontman Freddie Mercury was visited for ‘hours’ at a time by Elton John in the year before he died in 1991, according to Mercury’s good friend Peter ‘Phoebe’ Freestone. Freddie Mercury yelling to Brian May in the studio after getting AIDS was recently revealed.

Freestone said in a new official Freddie Mercury website ‘Ask Phoebe’ piece, “People have been asking about Freddie’s friendship with Elton John. They met when Queen’s management was taken over by John Reid, who also managed Elton at that time. A great friendship developed and they spent quite a lot of time together.

Freddie Mercury calling out a Queen money lie was revealed recently. Phoebe added, “This lessened after a year or two because of their touring schedules, they were very rarely in the same city at the same time, particularly under Reid Enterprises, because you can only give every city so much of a good time on any day!. They still kept in touch and I have many fond memories of the times they did meet up. On is from when Freddie had torn the ligaments in his knee in Munich and was in a plaster cast. Elton performed in the city and of course Freddie wanted to watch the show.

Freddie and I were seated on the side of the stage enjoying ourselves when Elton stood up from the piano seat and said ‘This is for Melina, the poor cow’ and then proceeded to sing ‘I’m still standing’! He also visited Garden Lodge regularly during the last year of Freddie’s life, spending a few hours with him each time.”

You can view the Q&A at FreddieMercury.com. Freddie’s official social media recently mentioned an AIDS charity that everyone should check out.

“Thank you @youtubemusic for putting Freddie in NYC & LA!🗽 The official video of Love Me Like There’s No Tomorrow is now live, in celebration of Freddie & the work of
@The_MPT Fighting AIDS Worldwide. Watch it now.” Donate @http://mercuryphoenixtrust.com/donate #ffad.” A Queen member recently revealed a ‘naughty’ Freddie Mercury video.

Thank you @youtubemusic for putting Freddie in NYC & LA!🗽 The official video of Love Me Like There's No Tomorrow is now live, in celebration of Freddie & the work of @The_MPT Fighting AIDS Worldwide. Watch it nowhttps://t.co/TkGl2lZiPX