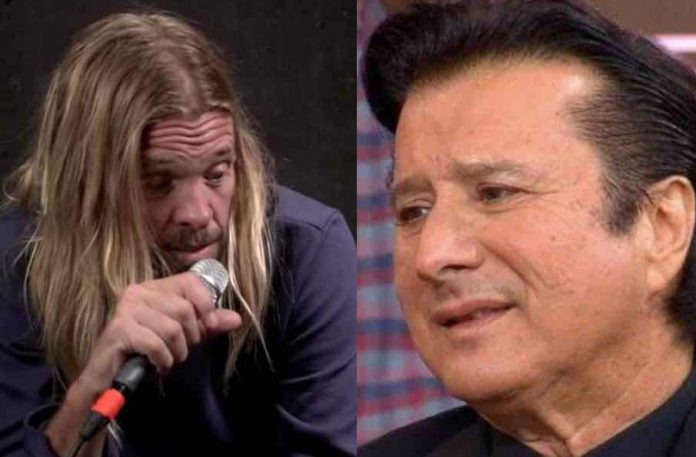 Foo Fighters drummer Taylor Hawkins revealed in a new 94.9 The Rock Toronto interview that former Journey singer Steve Perry, and Perry’s manager, helped him get his gig with Alanis Morissette. Perry became a fan of Hawkins’ drumming with Sass on his final tour in the mid-90’s. Hawkins just detailed joining Rush for a surprise performance to stand in for Neil Peart.

So at some point, Scott said, ‘Hey, I know this gal; she’s making a record right now, and she’s gonna need a band. Maybe you’d be interested in trying out to play drums?’ And it was about that time that it looked like the Sass gig was going to be ending – and it was ending. So I said, ‘Yeah, sure, anything beats working at Guitar Center.’

And she came to one of the last Sass Jordan gigs that I played up here in LA, and I met Alanis. We just kind of chatted for a second, and she was really nice and quiet. I wasn’t sure if anything was going to cover it, and a couple of months later I got a call from Scott, and he said, ‘Hey, we’re doing tryouts and Alanis wants you to come to try out.’

So I showed up with my drums in the back of my truck, which I still own today, and I tried out along with like 60 other drummers, and I got the gig.”

Perry reunited with Journey to release Trial By Fire in 1996, but he departed the band after a surgery before he could ever tour the album. Perry was replaced, and while he released a new solo album called Traces in 2018, he has not toured since the mid-90’s.