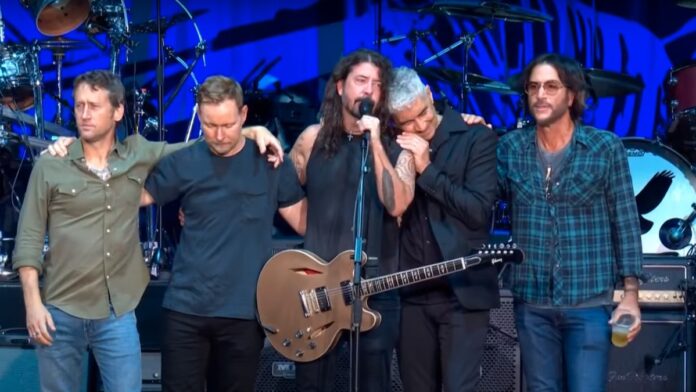 It looks like Dave Grohl and Nate Mendel are currently in Dublin, Ireland as a photo has surfaced of the pair. This photo went straight from Instagram to Reddit where rumors swirled about why the duo were over in Ireland.

Of course, some fans took an extra mile and said that they were there to find their new drummer. With it being Ireland, there’s only one drummer that it could be. U2’s Larry Mullen Jr. would be the name that would be spoken about on the Reddit post.

The Foo Fighters and U2 are different bands, but they do have their similarities as well when it comes to how the songs are composed. Both bands have a very catchy, simple, formula that they follow and it’s worked great for them.

Do the fanbases carry over? That’s tough to say. It seems like there would be some kind of pushback from Foo Fighters fans if Larry Mullen took the throne. That’s not at all to say that it would be Larry’s fault or that he doesn’t deserve to be in the band. He’s incredibly talented. It just feels like the fanbase is split between more Foo Fighters or U2 fans rather than fans of both bands.

While the rumors are fun to think about, another Reddit post suggested that Dave and Nate just seem to be taking a vacation rather than focusing on music at the moment.