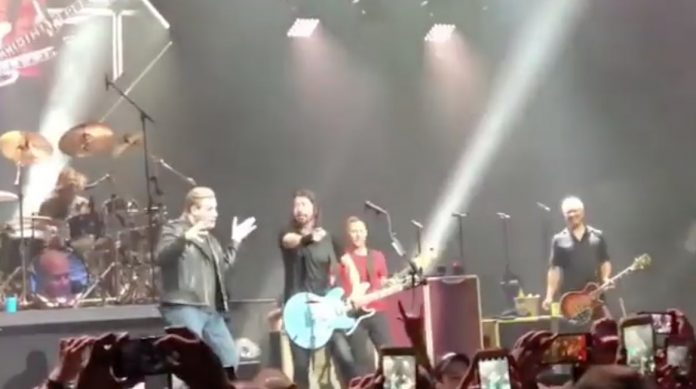 At Foo Fighters’ show on Saturday at Jones Beach Theater in Wantagh, NY, John Travolta joined the band onstage as they played a song from Grease. Watch video below!

Dave Grohl revealed how he looks at every Foo Fighters album like it could be their last in a new CBS Sunday Morning interview.

“It’s weird. Ages ago when I was a kid, my Dad said, ‘You know this isn’t going to last right? Save every check like it’s the last one your ever going to make.’ Every time we make a Foo Fighters record I think, well if this was the last one, we had a good run, it would have been great.”

He also said, “When most people think about Nirvana they think about a video, or a song on the radio, but to me it was a really personal experience with some friends that went from sleeping on floors to then being the number one band on the charts.”

Grohl seemed to think the Foos will be around for a long time at the BB&T Pavillion in Camden, New Jersey on Saturday, NJ.com reports.

“With rock’s waning popularity comes fewer mammoth concerts like this, and in turn, fewer monster rhythm sessions like this. How long until the extended drum solo becomes a lost art?

Luckily, the Foo Fighters show no signs of slipping into retirement, despite becoming eligible for the Rock and Roll Hall Of Fame in two years (they should enter with ease).

‘You know we’re gonna be on the road for the rest of our f***ing lives,’ Grohl reassured, between hammering riffs on his ice-blue Gibson Trini Lopez.”