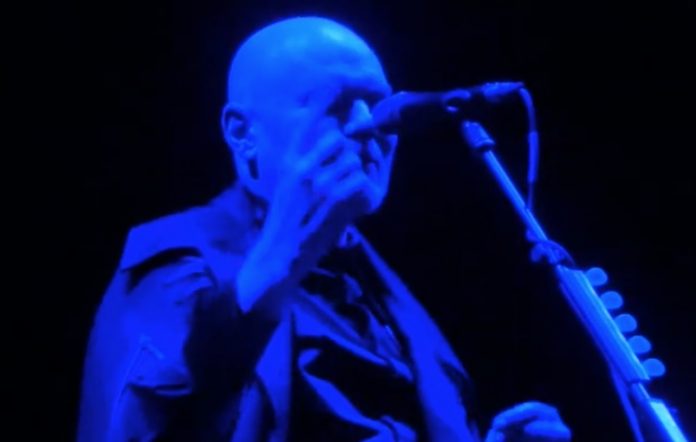 Smashing Pumpkins frontman Billy Corgan temporarily stopped a performance after a fight broke out at his show at the Sherman Theater in Stroudsburg earlier this week. After a fan was ejected, Corgan resumed performing. This comes after Corgan threatened to quit touring solo after a disaster at a concert last week.

Gooch posted on Netphoria, “Stroudsburg: Tonight’s was one of the best shows Billy has ever put on. His voice was amazing, no dropped consonants and little vibrato – like old times. He started show a little cold I felt — AJC came out, we sang happy birthday. Then halfway through the set there was a fight in the back. Show was stopped and as it settled down, someone yelled out ‘play beautiful’ and another ‘rat in the cage.’

Billy said last night’s show in Kentucky was awful, they ran him out of town, he had 9 hour drive to think about things and he realizes people get Caught up in the moment, but he’s not a jukebox. He spent weeks between recording two SP albums to put together a set list for his acoustic shows, and he would like to play the songs he wants to play for us, but it’s up to us if we want to hear them. It was very mature and heartfelt. Crowd cheered and encouraged him.

Corgan revealed why the Pumpkins rejected MTV Unplugged yesterday. Gooch continued, “Then he seemed to ease up, and lighten up with jokes and stories. Crowd was fantastic, standing ovation to start the show, a few times during after songs, and at end. Played purr snickety and cherry in acknowledgement of great crowd. You can tell he was hurt deeply by the disrespecting Kentucky crowd but he seemed redeemed by tonight’s crowd. I was very proud of the crowd, they really loved him, were quiet and very respectful and appreciative. Hardly any talking, shouts, outbursts etc. Seemed like true fans and long time fans – knew new songs, loud claps and yeahs with ogilala songs, and of course SP songs. I hope someone recorded it because it was an amazing show start to finish. Best I’ve seen of Billy and I’ve seen him a lot over past 25 years.

I wish you all could have experienced it, it rekindled my love of SP and especially BC as a person and performer. I totally understand and get him , where he’s coming from and his demons. Someone was drunk and he called her out on it, towards the end of the show, said something about her not having manners. He said , ‘Sure I was beaten as a kid, but I have manners. Obviously you weren’t beaten.’ Which I for for one can sympathize with. He addressed the school shootings this week. It was just a heartfelt show and a mature show, which struck me odd after the poor reception last show. He almost seemed like he needed to heal , and this show and this crowd did just that. Set list was great. I was impressed wholeheartedly.” Billy Corgan unloaded on a drunk fan last week.