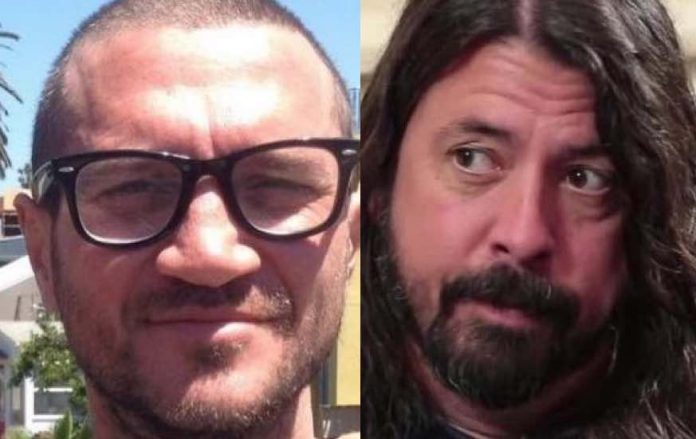 In a new interview, Dave Grohl discussed Foo Fighters playing with Red Hot Chili Peppers at one of their final shows with John Frusciante, who recently showed up at Coachella. Frusciante has not played live since 2007.

Grohl told Kerrang, “The first time we played Wembley Stadium, it was for Live Earth in 2007. It was Metallica, Madonna, the Beastie Boys, Genesis, Red Hot Chili Peppers, the fucking Pussycat Dolls… It was all these really gigantic bands – and then us. So I just assumed that the line-up would be in order of popularity, meaning we’d be down here, and Madonna would be up here. So I get there and look at the schedule, and we’re on at like f**king nine o’clock at night or something, right before Madonna, I think, and after Metallica and the Chili Peppers, and Genesis, and the Beastie Boys.

I’m like, ‘What the fuck – this is crazy! What do we do with this? We can’t go on after Metallica. That’s f**king insane! That’s the stupidest idea ever!’ It went over so well that I jokingly said, ‘Well, we’ll be back next summer doing two nights in this place on our own.’ I was fucking kidding, and then after six or seven months we got the call saying, ‘Hey, do you really want to do Wembley?’

It was such an incredible full circle moment for the band, because none of us ever imagined that we would be there. We’ve had that moment more than a few times: the first time we headlined Reading; the first time we did a Wembley; the Glastonbury show. There have been those moments where you’ve been like, ‘This started with a fucking demo tape.'”

Red Hot Chili Peppers have been attempting to reach out and reconnect with reclusive former guitarist John Frusciante since last year, with Flea being photographed with Frusciante for the first time in a decade at a boxing match at Staples Center in Los Angeles.

Since then, Josh Klinghoffer has worked John Frusciante solo material in a live performance, and now the band had “Murders” by Frusciante played on louder speakers before their show started in Egypt a few months ago.

Asking Benjamin commented on YouTube, “John, I forever wait for your return﻿.”

Alex Peseta commented, “Looks like RHCP send a signal to JF;) Man, stop doing sh…t and come back, cos we are doing sh.t without you also.”

snw8891 commented, “It really seems that they’ve been reaching out to him lately﻿.”

Cesar V commented, “Imagine how many people knew the song. I love how the Red Hot don’t forget him. <3﻿." Lawrence Reitan commented, "Remember what Throw away your television's outro said: Please don't you ever leave, please don't!﻿" khalo0odz commented on Reddit, "Dude I freaked out when murderers started playing. It’s been my ringtone for years." DelusionalThomas66 commented on Reddit, "Do we even know if the band chose what songs to play pre show? Maybe the venue people did it?" elziv commented on Reddit, "Not 100% sure but it’s pretty common for bands to choose what is played before they go on stage."