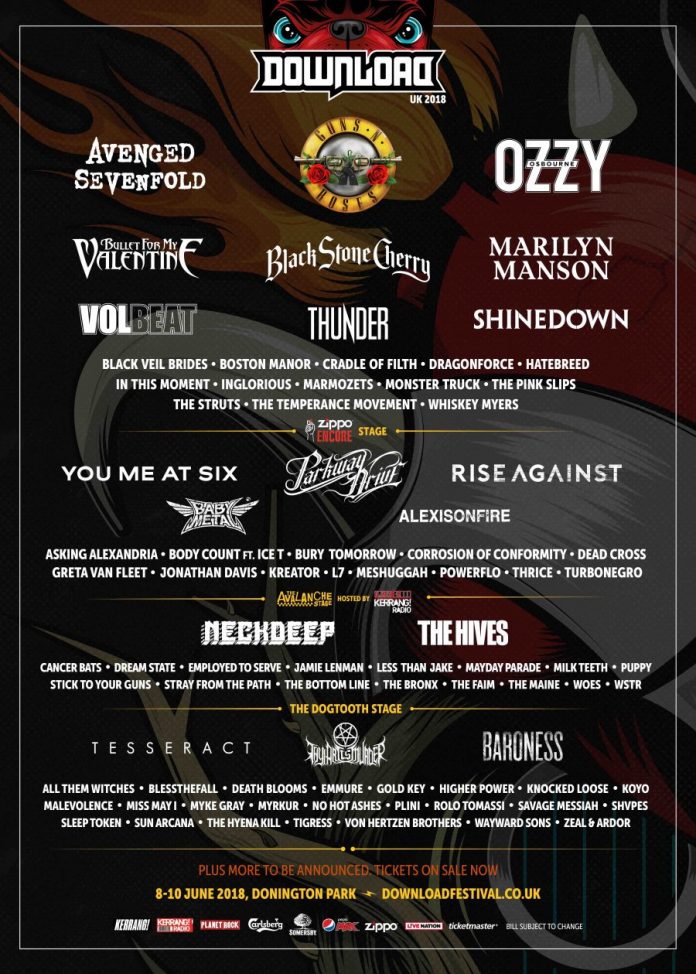 Download Festival 2018 is less than six weeks away as metal heads and rock fans combine on the legendary Donington Park for a weekend of pure unadulterated fun. The festival is still the best known in England and is one of the most important in the world. Formerly the Monsters of Rock, the event has been staged at Donington Park since 1980 hosting the very best in hard rock and metal. This year looks set to be one of the best editions on record. Friday will be headlined by Californians Avenged Sevenfold who will be rocking hot nearly 20 years of hits. The ever popular Bullet For My Valentine will be backing them up and other main stage acts on the festival’s opening day includes Volbeat, Marmozets, Dragonforce, Avatar and Boston Manor. There will be 4 stages this year which on the Zippo Encore stage you will be able to catch You Me At Six and you don’t want to miss Andrew WK who has been getting rave reviews in Europe lately. Jonathan Davis vocalist for Korn will also be doing his solo show on the second stage. The more intimate Avalanche Stage will see a brutal headlining gig by the legendary Bad Religion and the Dogtooth stage will be headlined by Tesseract. There will be over 30 bands to catch live on the first day! The 2nd day of the festival has a wealth of bands but all eyes will be on the return of the one and only Guns N’Roses who will headline the main stage. Whilst the band last performed here in 2006, GN’R with Axl, Slash and Duff together have not played at Donington since 1988 and this will mark a very cool 30th anniversary for the band on the hallowed grounds. Black Stone Cherry will offer ample support and British veterans Thunder will also play a main stage set. The Temperance Movement, The Struts, Monster Truck, Whiskey Myers and The Pink Slips will complete the main stage activities. The Zippo Encore stage is very strong being headlined by Parkway Drive, Baby Metal who has supported Guns N’Roses on some dates will be here too. Zakk Wylde and Corrosion of Conformity have played the festival a few times and will be welcomed back and all girl rockers L7 will bring the crowd in with their hits. The man, the myth, the legend Ozzy Osbourne the craziest cat of them all and the biggest influence on metal music will headline the main stage to close out Download on the Sunday night. Whilst Black Sabbath have called it a day, Ozzy it appears never will and we should all be thankful that he hasn’t, his show is set to be brilliant and unforgettable. The mighty Marilyn Manson will be supporting Ozzy together with talent from Shinedown, Black Veil Brides, In This Moment, Hatebreed, Cradle of Filth and Inglorious, whew! The Zippo Encore stage looks a bit special too as that will be headlined by Rise Against and Alexisonfire will support. Messhuggah will join them. Ice T will be here with his legendary band Bodycount and German thrashers Kreator also. Mike Patton’s newest project Dead Cross will be making their UK debut too.

Download Festival 2018 is not to be missed and the good news is that tickets are still available from the link below.

Guns N’ Roses Bank Payment For Use Your Illusion Leaks