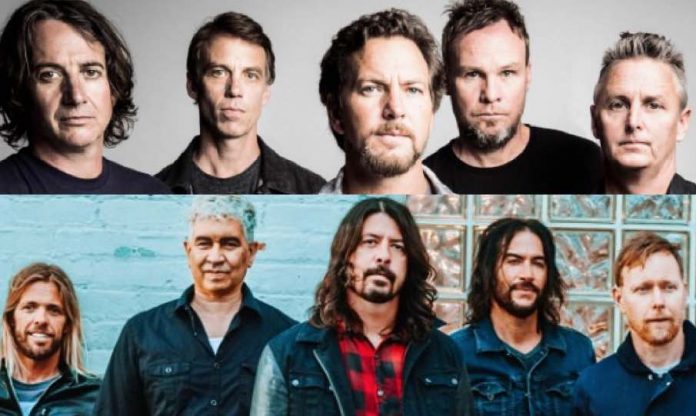 On Thursday’s episode of The Five on Fox News, hosts of the show discussed a new rumored Foo Fighters, Pearl Jam, Soundgarden, and Melvins supergroup. Alternative Nation broke the news that King Buzzo, Matt Cameron, and Taylor Hawkins are in the studio. The story was part of Wild Card Thursday on The Five. While Greg Gutfeld was complimentary of the rumored band, Jesse Watters said he had never even heard of the Melvins. Big time disrespect!

Dana Perino said, “Foo Fighters, Pearl Jam, and Melvins members have formed a new supergroup. Whose is this?”

Greg Gutfeld raised his arms in celebration and proclaimed, “Me!”

Dana asked, “This is speculation over a new supergroup, are you excited about this?”

Gutfeld said, “I don’t like supergroups except, and Kennedy will probably agree with me, but this is a great supergroup. You’ve got King Buzzo from the Melvins, amazing. You’ve got Foo Fighters and Soundgarden. I know it’s a Grunge supergroup, and having King Buzzo, I’m on cloud nine.”

Jesse Watters asked Gutfeld, “Who are the Melvins?”

Gutfeld scolded him, “What! Get him out of here!”

Matt Cameron has posted himself playing many guitar riffs with the hashtag #DadRock in recent months, with many fans hoping he was writing new Pearl Jam song ideas, but could it be for a project with Hawkins and Osborne? We’ll have to wait and see. Cameron released his debut solo album Cavedweller in 2017, and Pearl Jam have reportedly done some work on a new album since then, releasing the new song “Can’t Deny Me” in 2018. The band have been quiet since wrapping up their 2018 tour last fall, announcing no plans for their new album after Eddie Vedder said the next time they’d play together would be in a studio.