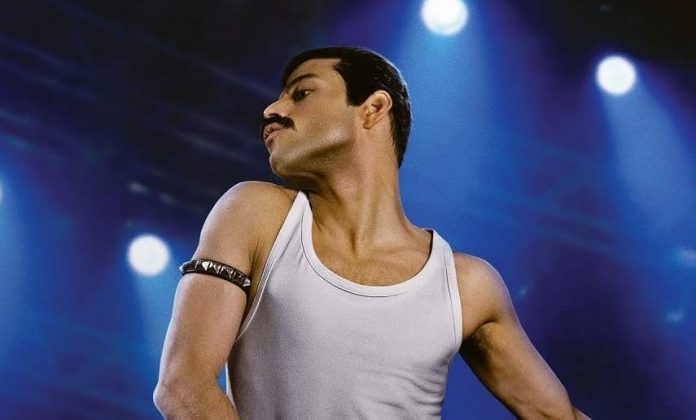 Rami Malek has shot to superstardom since playing late Queen frontman Freddie Mercury in the Bohemian Rhapsody biopic film last year, but sadly fame from the movie recently led to him being groped by a fan. He said in a recent interview that a drunk woman ‘had her hands all over my butt’ the other day. Malek was polite, turning to the groper and asking, “Can you not?” In another sad Freddie Mercury incident, his statue was recently vandalized with awful photos surfacing.

“People’s perception might be altered, but when you sit down and talk to me, there’s nothing that’s mystifying. I’m not fucking covered in gold,” he told GQ.

Malek is a taken man, dating Bohemian Rhapsody co-star Lucy Boynton, who played Mary Austin. During the interview, he went to Goop looking for a gift for her. Rami was asked if Lucy is a bath taker. “She’s British, so all she takes is baths.”

How about a 24-ounce sack of “soak” formulated according to both Eastern and Western herbal traditions? “What is it, bath salts?” Yes, it contains “pharmaceutical-grade” Epsom salts. On the downside, it’s nearly as big as the Champagne coupes. “Yeah, I might not want to carry that around, either.” He later said, “Actually, she wants deodorant. Does it have aluminum in it?”

He grabbed deodorant and put it in his pocket, then looked at the salesperson as it appeared he was trying to steal it. “Oh, I realize how this looks. I’m just seeing if it will fit into my pocket so I can carry it around.” “We can hold on to that for you,” the salesperson responded. Malek liked the deodorant. “She’ll be so ‘chuffed,’ ” he says, sticking the word in air quotes. It’s a Britishism that he harvested from London and continues to find useful.

Brian May revealed a ‘bad’ Freddie Mercury boyfriend photo last week. May wrote on social media a few days ago, “Mmmmm … a barbecue smells good, don’t it ?! Then I go and have a look. How does this make you feel, swiping on this ? Hungry ? Happy ? Sad ? What else ? Maybe nothing ? Do you think you feel differently than you might have done 5 years ago ? 10 years ago ? I’ll be interested to see what you say, folks. Cheers – Bri.”