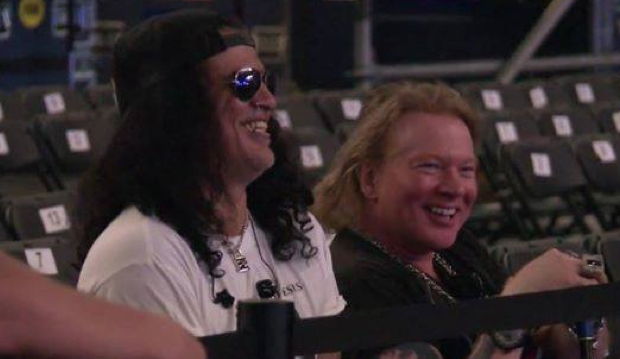 Axl and the gang are at it again. After busting open a fan at a recent concert, Gun’s n “Cane’s” are suing an online gun store for – copyright infringement. I’m guessing. Either way, the band who want to hang on for dear life have managed to crawl back into the headlines, but again, not for something admirable. However, controversy creates cash as the saying goes…

As per KFI Iheart, Guns N’ Roses sued an online gun store called Texas Guns and Roses for unspecified damages Thursday, alleging in Los Angeles federal court that the store owner is attempting to dupe consumers into believing that the website is associated with the rock band. It doesn’t sound that way to me, but oh well…

The plaintiffs allege that Jersey Village Florist “selected and adopted defendant’s marks for the purpose of confusing consumers into believing that it was connected or associated with, or licensed by, GNR.” Go with a name you know… Great marketing tactic, if it works.

Lawyers for Guns N’ Roses further allege that the defendant purports to sell roses and other flowers as a contrivance to try and justify the “wholesale appropriation” of the Guns N’ Roses trademark. However, Jersey Village Florist does not sell flowers on the Houston-based guns and ammunition website, the lawsuit says.

David L. Clark, a Houston attorney representing Jersey Village Florist, said that while he has not seen the complaint, it appears that GNR’s lawyers have filed in federal court because their attempts to persuade the Trademark Trial and Appeal Board to cancel texasgunsandroses.com‘s registration is likely to fail.

“There’s never been any confusion (between the band and the website) and they have no evidence of confusion,” Clark said.

“This is an attempt to run up costs and burn us out,” he said. “Our client sells metal safes for guns and flowers, and have a one-stop website and absolutely no one is confused. Nobody thinks we’re the band or there is some affiliation. We will be fighting back.”

GNR says it became aware of the name Texas Guns and Roses in October 2019. Several months later, lawyers for the band sent a cease-and-desist letter requesting that the defendant voluntarily cancel its registration of the name. How did they find out about it in the first place? That’s the real scoop.
Jersey Village Florist continues to use the name and “intentionally trade on GNR’s goodwill, prestige and fame without GNR’s approval, license or consent,” according to the complaint. That’s a tough guy.

“This is particularly damaging to GNR given the nature of defendant’s business,” the lawsuit contends. “GNR, quite reasonably, does not want to be associated with defendant, a firearms and weapons retailer. Furthermore, defendant espouses political views related to the regulation and control of firearms and weapons on the website that may be polarizing to many U.S. consumers.”

The suit seeks unspecified damages and a court order prohibiting the use of the website name.

GNR’s general partners are listed as Axl Rose, Saul “Slash” Hudson and Michael “Duff” McKagan. The band formed in Los Angeles in 1985, and signed to Geffen Records the following year. Having sold over 100 million records worldwide, GNR is one of the biggest selling acts in history.

Let’s wait and see how this one unfolds.