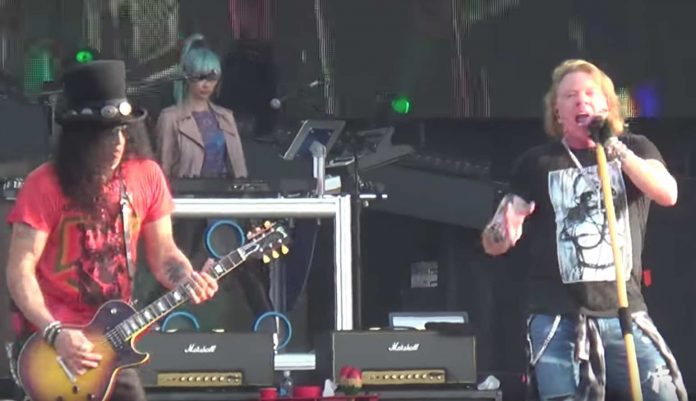 A mysterious GNR Evolution forum poster named downtownterry leaked a never before heard 2009 rehearsal recording of Guns N’ Roses’ “Chinese Democracy” yesterday. He also posted some rumors about Guns N’ Roses recording plans. While he is anonymous and the rumors are totally unsubstantiated, it is interesting since he did have access to never before heard recordings. He claimed that the rumored GNR cover of “The Children of the Revolution” for a T-Rex tribute album will feature Ringo Starr’s son Zak Starkey. Starkey is the touring drummer for The Who.

Everyone in the band wants to do an album.

Slash pasted his tracks on a bunch of CD leftovers that were going to be on GH2.

Ringo Starr’s son is on The Children of The Revolution GNR cover.”

He also said many elements of “Shadow Of Your Love” were newly recorded, which Steven Adler also speculated in an interview.

“By new, I mean that Shadow isn’t fully from the 1986 demo. There are many parts that are new, including most of Slash licks and drums.

I reckon that Izzy’s part and most of Axl’s vocals are old.”

Duff McKagan is is set to release a new solo album in 2019. McKagan began recording the album back in March with producer Shooter Jennings. Guns N’ Roses’ Not In This Lifetime tour helped inspire the album.

“I wrote a couple of articles about historical places I passed through on this last tour and people kept asking if that was going to be the focus of my next book,” says McKagan. “But an unseen and irrepressible force guided me to write little vignettes of reflective prose…little instant reactions.

“The heartbreak, anger, fear, confusion and divide I have experienced over the last two and a half years of traveling this globe of ours coerced these words into songs that tell my truth, and one that I hope will spread and help us all. I do this for my daughters…I do this for my love of where I grew up…I do this, because I truly feel it must be done and said right now.”