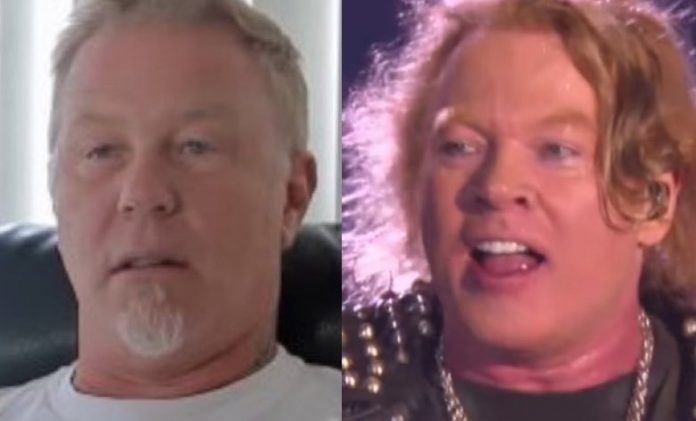 “We got along great until we started the tour with them. There’s a lot of reasons but once that tour started it went from we were great friends to we don’t really like each other. Just generally. I think that they intentionally wanted that spot before us and I told Axl I wanted to swap headlining and he didn’t wanna do it and I think they walked into it going, we’re going to try and kick their ass every night. That’s what an opener is supposed to do. As a manager, that’s what you tell your opener. Go leave them with a feeling of go and try to follow that.”

“When I first started with a band, tee shirts were $19. And we earned out our advance in a month. So tickets went to, because they gave us such a large advance that tee shirts went to $20. And we kept earning our advances as was Metallica. Metallica wanted a better deal than GnR, GnR wanted a better deal than Metallica. And when tee shirt went to like $23, $22 maybe, I told the band you know what, MEtallica is going to have a better deal than you. I won’t do it anymore. This is where I jump off. And they supported it because they understood and again it was because I was more fan-based. I made sure that all of our shirts were done in heavy cotton material. I didn’t want some throw away tee shirt that was going to rip after six months, two months.”