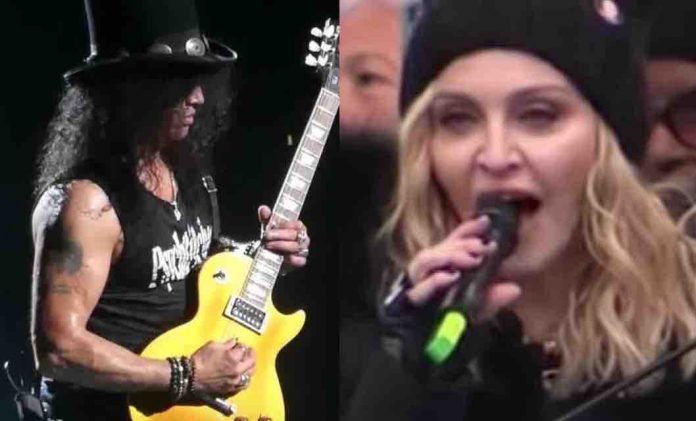 Guns N’ Roses guitarist Slash revealed that he much prefers Lady Gaga to Madonna in a new television interview. Alternative Nation transcribed his remarks. He was first asked if he prefers Jimmy Page or Keith Richards, and he found it to be a very difficult question. Alternative Nation transcribed his remarks.
Slash said, “Oh fuck, that’s not fair. They’re so different. I love Jimmy Page, but I really grew up on Keith Richards.”

When asked who gets him more excited between Lady Gaga and Madonna, he said, “I’d have to go with Lady Gaga.”

Slash mocking a Guns N’ Roses replacement was detailed last week.
He was later asked if it angers him to see celebrities and young people wear rock shirts as fashion statements. He said, “The funny one to me is all the kids that where CBGB’s shirts, but have no idea what CBGB’s is. It might be fashionable as some sort of statement, but it keeps that brand alive. It’s cool, you can’t get angry with people because they’re wearing a t-shirt and they have no idea what band is on it.”

He also discussed putting together the Conspirators after hiring Myles Kennedy, “So when he agreed to do it, then I had to go look for musicians for the actual band, and I was introduced to Brent Fritz, who I had never heard of, and he was amazing. At the time I actually did have a bass player that I was working with. He was a really good musician, but he didn’t have the right feel for what I was trying to do.

So Brent goes, ‘I know this guy named Todd who lives in Vegas, he’s really good.’ I was like, ‘Yeah, okay. I’ll call him.’ Tood came down, and I couldn’t have asked for a better bass player, it just clicked. So that was a chance thing where the stars aligned and put me in contact with the right musicians, without me knowing anything about them.” Slash buying a ridiculous car was revealed last week.