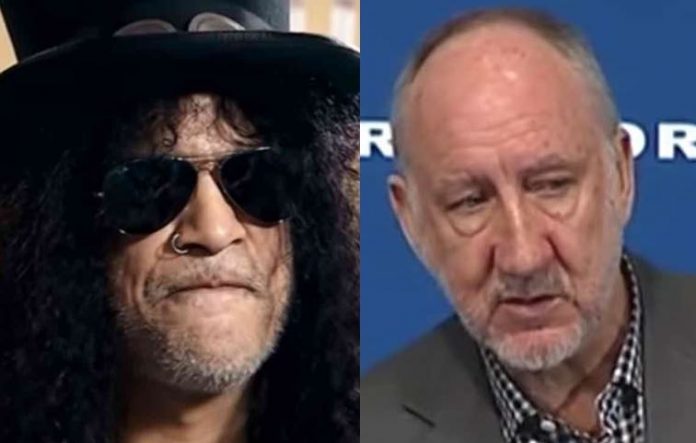 Guns N’ Roses guitarist Slash discussed The Who being one of the first rock bands to influence him in a new Kerrang interview.

“Well, that was the first real road trip that we ever did, besides hitchhiking to Seattle in the very beginning. It meant a lot to me because I have family here, but also the music that I was really influenced by was from here. My beginnings of rock’n’roll started here as a kid, thanks to bands like The Who, The Yardbirds, and The Kinks, because that’s what my dad and my uncles were into. From the moment I can remember Stoke-on-Trent, where I lived, I was weaned on them all. Then when I moved to the States it really opened up. There was so much shit going on music-wise. When the record came out it was really well received in the UK, so it’s always been a special place in my heart.”

In a recent interview with New Zealand’s Bayrock FM, Slash was asked about advice he would give to new people in the music business.

“I get asked this a lot, and I always try to come up with a very optimistic piece of advice for young people. It’s a tough industry, and it gets tougher and tougher as the years go by, as far as I’m concerned. But the thing about it is just to be dedicated and persevere — to put the time in, work hard at it and to stick to your guns and to do what it is that really turns you on musically. Don’t conform to other people’s… what they tell you to do, or what they tell you to play, or how to play, or what kind of music to do, whatever the industry standard is. Don’t compromise, and do your own thing.”

“The most important thing about being a musician is to love the music and to put your heart and soul into that and to do whatever it takes to be able to communicate that to other people. And it’s an interesting industry at the moment, because there’s no set rules right now, how to do [things]. There used to a path you could follow, and it was pretty tried and true.

Now, it’s all over the place, so you have to be a lot smarter about how you do it and come up with different ways of doing it that other people aren’t using already. It’s definitely sort of like the Wild West. But there’s a lot of platforms out there now that didn’t exist when I started out that you can get exposure on and get your music out there and so on and so forth. I think the most important thing is passion and dedication.”