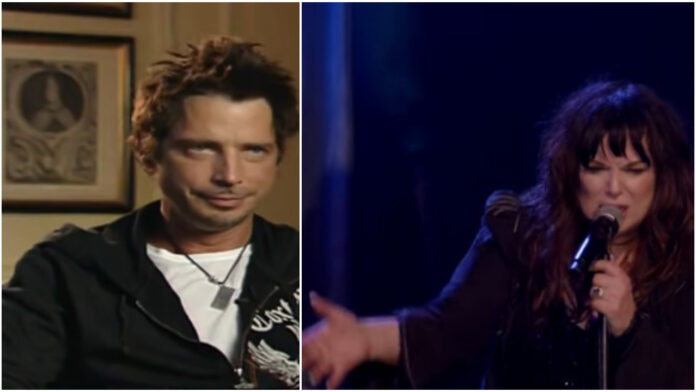 The rock and roll community was significantly hit after the loss of Soundgarden frontman Chris Cornell. The beloved ‘Black Hole Sun’ singer was found dead in his hotel room on May 18th, 2017 at the MGM Grand in Detroit, Michigan after performing a show with Soundgarden on May 17th. Cornell was lying dead with an exercise band around his neck and found dead by his bodyguard with the cause of death ruled as a suicide by hanging. This tribute song for Chris Cornell was recently revealed.

During a recent interview with music journalist Eamon O’Neill in promotional for her upcoming solo album, Fierce Bliss, which is due out on April 29th, Ann Wilson touched on Chris Cornell and what it was like for him to induct Heart back in 2013 for the Rock and Roll Hall and Fame. Credit to Eonmusic for the following quotes.

“I didn’t know that he was going to induct us,” Wilson admits, “so when it came and Chris was up there doing it, it was really emotional because it was so personal and so intimate.”

“He was such a sweet soul,” she continues, “complicated, dynamic, troubled. And just to see him up there just glowing, and giving this thing was really moving to me, I remember that. And I had no idea that he even cared about our band that much. We knew each other as friends, but we never talked together about Heart before, so it was kind of a cool moment.”

Wilson would go on to say in regards to Cornell’s death: “It pretty much knocked the wind out of everybody who knew him, because although there were hints of it over the years that he was deeply unhappy, no one expected that. So it took a minute to absorb that loss.”

During the same interview, Wilson would discuss the Seattle grunge scene and what that time period meant to her: “Well, I think the Seattle music community in those years was extremely tight. Everyone knew everybody else, and there wasn’t really like a generational separation between musicians. So, it was a natural for, when we finally got off the road from the eighties and went back to Seattle to relax a little bit, we just faded into the scene and got to know a lot of those guys and women, and it was a blessed thing, because we weren’t comfortable with the big, super-high commercial eighties, and we were anxious to really shed that skin, and we did.”