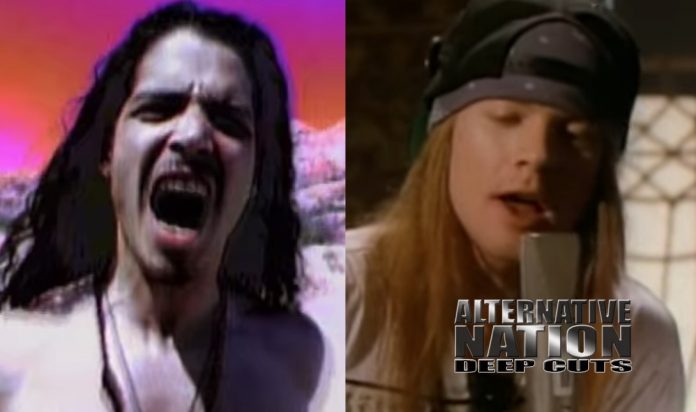 Edited by Brett Buchanan. This is the first part of a 3 part series detailing Soundgarden’s time visiting England during their prime years. Alternative Nation are publishing articles in honor of Chris Cornell as the one year anniversary of his death approaches.

The U.S. tour was a success, and Soundgarden’s European adventure kicked off in May with Guns N’ Roses. GN’R’s Paris show was to be a pay-per-view event which would include the support bands like Soundgarden.

After the Paris show Guns N’ Roses singer Axl Rose stayed up for a few days straight, meaning that some shows had to be rearranged and thus Soundgarden had a week off from the tour before they hit England. The band kept themselves busy by playing the infamous PinkPop Festival in the Netherlands to an absolutely packed crowd. This was a Monday, and five days later the band were in England…..

Guns N’ Roses and Soundgarden were ready to perform at London’s iconic Wembley Stadium, filled to the rafters with 80,000 rock fans. Whilst the bulk of fans crammed into the stadium were there for Guns N’Roses, there were some die hard fans of the Seattle quartet pushed up towards the front. They were the ones that had already bought, listened to, and consumed the band’s latest album, Badmotorfinger, which had been available for almost nine months. Fame and fortune were knocking on Soundgarden’s door, which had taken 8 years to achieve, but fans ingrained in the Seattle scene knew that Soundgarden were the band to get the ball rolling long before Nirvana, who in 1992 would go on to headline the infamous Reading Festival in front of 60,000 people here in the U.K.

On this day Soundgarden were opening the show, Faith No More would be next, followed by Guns, but their fans had opted to queue for beer rather than watch what will happen next…..

All goes quiet as the opening recording from ‘Searching With My Good Eye Closed’ rings around the stadium. The pocket of Soundgarden fans at the front, the sun blasting them from above and the atmosphere radiating them from outside, group together. And there they are, Kim Thayil, heavily bearded, beady eyed with a smile that could melt a million hearts enters from the left hand of the stage. Matt Cameron sits and then jumps by his drum riser, Ben Shepherd looks down at his bass which is a few inches from the stage floor, and Chris Cornell arrives, shirtless, guitar strapped around his body as if it hadn’t left him since birth, and his dark brown golden locks moving with the slight wind. With a glance, Cornell stares wickedly out into the crowd and the opening chords of ‘Rusty Cage’ spiral out from the stage to the audience. Cameron slowly beats to the opening grooves, Cornell shuffles his head and then the song explodes to life.

By the end of the first number, the band don’t just have the attention of a few hundred fans down the front but now the bar is emptying, now people are returning to their seats to watch a band who feel like a molotov cocktail of Black Sabbath, Led Zeppelin, and The Beatles. ‘Outshined’ is next to blast from the speakers, and as Cornell screams the song title it is clear that we are witnessing someone very unique and dedicated to their craft. True, the band are rough around the edges and not as polished as Guns N’ Roses, but this was a band in their prime, this was how Soundgarden were supposed to be heard. When the song ends the band launch into their next with Cameron furiously hitting the drums. Shepherd is on one knee, with his strands of hair half covering his face, and jumps up pushing his bass between his legs, and he continues to play face down, as Thayil teases the crowd with rough chords. The fans at the front have created a mosh pit for they know what song is coming, like a phoenix from the flames, Cornell surges to the front of the stage arms up and to the side and the band launch into ‘Jesus Christ Pose’. The song ends with Cornell attaching his guitar to the microphone to make a crucifix, and you know even with Faith No More singer Mike Patton and Guns N’ Roses frontman Axl Rose still to come, that you just got your money’s worth right here, and it isn’t even 6PM yet. He blew them away.

Soundgarden looked back on their European opening slot for Guns N’ Roses with admiration, but also caution. Ben Shepherd would go on to say that he wanted to hate the circus that was attached to such a large stadium tour, but he couldn’t because the guys in the band and their crew were just too nice. Though Cornell commented decades later that everything was fine, and in particular Slash and Duff were cool to hang around, but Axl could make things difficult. Matt Cameron said that the band had to do this tour in order to get on the Lollapalooza tour of 1992 and make a name for themselves.

That day Soundgarden could be summed up by a wall of guitars, Cameron’s symbols, Shepherd’s striking stare, and Cornell’s beautiful scream. It was all there, all evident to see on a blazing Saturday afternoon.