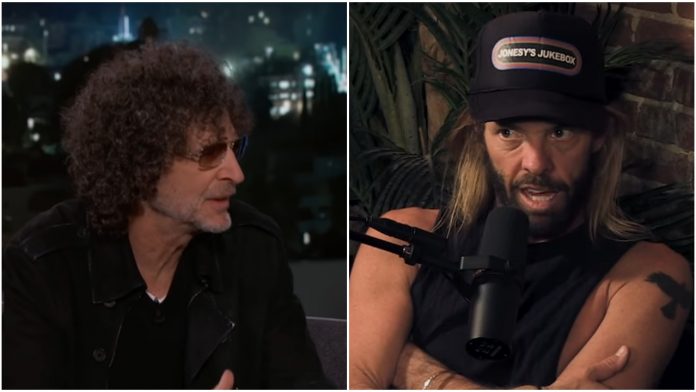 The rock and roll community is still shocked over the loss of one of the greatest drummers in modern memory in regards to Foo Fighters icon Taylor Hawkins. The fifty-year-old passed away on March 25, 2022, after emergency services were called to the Casa Medina hotel in Bogotá, Colombia, where Hawkins was suffering from chest pain in his hotel room. It would be revealed later confirmed that the Foo Fighters would cancel all upcoming tour dates due to the death of Hawkins. The deceased drummer’s autopsy results would recently be revealed.

During a recent edition of the Howard Stern Show, the popular ‘King of All Media’ would discuss with the controversial rapper turned pop=punk star Machine Gun Kelly about the death of Hawkins and would ask the infamous rocker if due to Taylor’s death if that would be enough to keep him off of hard drugs going forward.
To which MGK would reply: “Umm, out of respect for his spirit, like I, don’t even associate those two….for whatever reason it was his time to transition.”

During the same interview, Machine Gun Kelly would address the notable controversy between Pete Davidson and Kanye West as he would continue by stating the below. Credit to Page Six for the following.

“At the end of the day, man, we’re young men trying to find our place in the world and figuring it out, and it doesn’t help when you’ve got a million different voices ripping you apart or telling you, ‘You’re doing this wrong,
“We’re all just figuring it out, man. This is life,” he continued. “We love everybody, man. We have so much love. It’s almost like, if we need to be the vessels for people’s anger, then so be it. That must be why we’re here. I do hope that they can feel our spirit and see that we love you.”