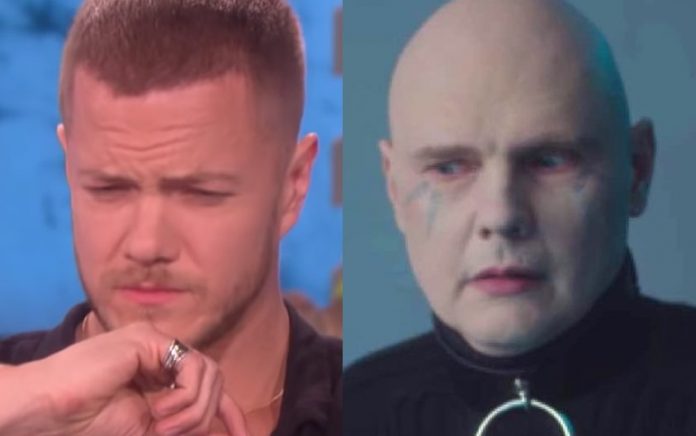 We reported on Thursday that Imagine Dragons frontman Dan Reynolds called out out his big name critics including members of Slipknot, The Smashing Pumpkins, The 1975, and many others, blaming the criticism in part for his depression. Since he made these claims, I’ve looked online and I haven’t found any quote of Billy Corgan trashing Imagine Dragons. I’ve been covering Billy Corgan for 10 years now and I’ve seen him trash a lot of musicians, everyone from his bandmates James Iha, Jimmy Chamberlin, and D’arcy Wretzky to Soundgarden and Pavement, but I don’t recall ever seeing him mock Imagine Dragons.

Corgan was asked about Imagine Dragons in a USA Today interview last year, and he didn’t say anything.

Q: Imagine Dragons is considered the most popular rock band right now. Have you listened to their music?

Corgan: I don’t comment on any artist. There’s no way to say anything about anybody. And I’m going to play victim for five seconds: I didn’t create this culture. I contributed to it, but this is somebody else’s Frankenstein, and they can live in it. I don’t participate. You can all argue about who’s great and who’s not great. I’ve said so many complimentary things about artists through the years that never gets quoted.

Should Dan Reynolds apologize to Billy Corgan? We’ll have to wait and see if evidence of Corgan ripping Imagine Dragons comes out.