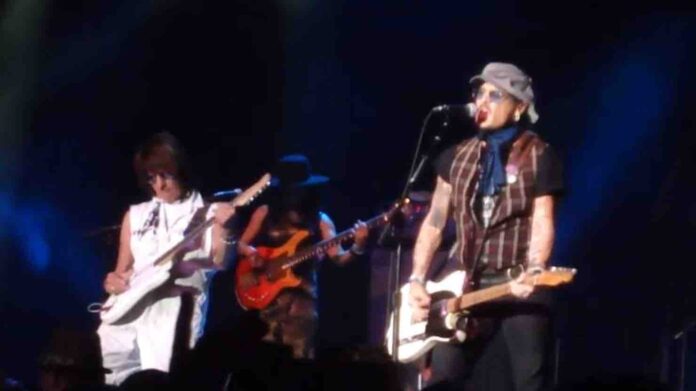 It’s incredible how much Johnny Depp has become somewhat of a mythical being. In one instance, he is in court for the Amber Heard trial and then he’s on stage ripping some gigs. Now, Johnny Depp is out in the world giving parenting advice to expecting waitresses. Who would have thought that Johnny Depp would become a gift that keeps on giving.

With Johnny Depp recently in the UK side by side with his good friend, Jeff Beck, the two have been making their way around the areas where they have been performing. Just recently, the two were seen with a big group of friends celebrating Johnny Depp’s freedom. The bill that came with the freedom bash was upwards of $60,000. While that may not have taken a toll on Johnny’s bank account; he did want to slow things down a bit and get some fish and chips instead.

When he and Jeff Beck popped into a small restaurant, Johnny went unnoticed for some time before people caught on. Johnny and Jeff were greeted by Lauren (their waitress) as Johnny noticed that she was pregnant.

Lauren said: “None of us could believe it, he went unnoticed for maybe an hour before anyone realized it was him and Jeff Beck just sat eating Fish and Chips together in the corner. His security came over and asked if there was any way we could get Sam Fender in without people ambushing him, so we shut off our upstairs terrace for them to go up there, they were really grateful and stayed for a couple of hours, with Sam staying long after Johnny and Jeff left.”

At this point, Johnny starts to lend his advice to the waitress about what may be lying ahead for her.

She continues: “He noticed I’m pregnant and was asking me how long I have left, then he was giving me some advice on nappies, lack of sleep, and the first few weeks of parenthood, saying it’ll be the greatest gift I ever receive and I won’t know love like it until I look into her eyes for the first time. He was also talking about his kids, who are grown up now, and how magical being a parent is.”

Lauren said the bar staff wished him luck before the upcoming verdict was announced in his defamation trial as Johnny said he had a Zoom call about it. That day, he won.

Special thanks to Manchester Evening News.