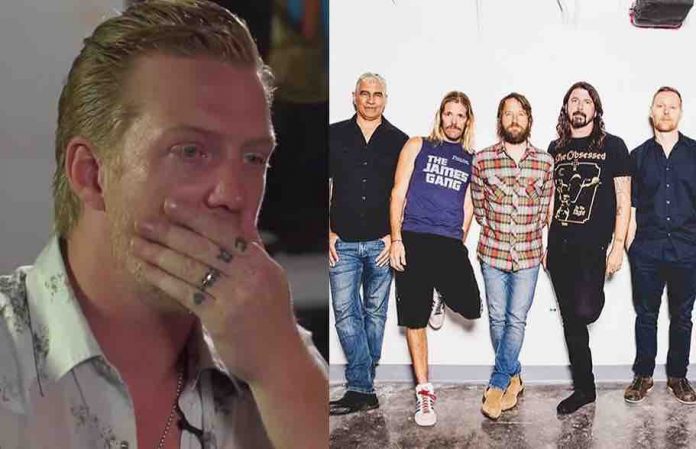 Foo Fighters drummer Taylor Hawkins has revealed that Queens of the Stone Age singer Josh Homme trashed one of his solo songs to him when he sent it, leading to him shelving it. Alternative Nation transcribed Hawkins’ remarks from an Absolute Radio interview.

“I had written a song called ‘Son of Mine’ about my son. A lot of times I’ll send songs to Josh Homme that I’m working on, get his feedback. Josh is a big influence on my music. He said, ‘What are you doing, a Shrek soundtrack?’ I was like, ‘Oh, ouch. Thanks a lot, jerk.’ So I was like, that’s not very nice, he doesn’t know what he’s talking about. Then I played it for my son, and he said, ‘If you put that on your album, I am going to punch you in the face.’ Because it’s soft, it’s a sweet soft song.”

Josh Homme recently broke his silence on his wife after divorce reports. Hawkins added, “He’s 12, but he’s strong, he could definitely give me a run for my money. I ended up kind of figuring it out myself that it wasn’t the strongest tune, so I ended up punting it, as they say. But in the meantime my daughter had found out that I wrote a song about my son, and she’s the middle child, so she reacted very middle child like and said, ‘You have to write one for me!’ Being a middle child is tough.

I was the baby, so I was sort of coddled by my brother and sister, and sort of forgotten about by my parents, which was fine by me. The middle child, we have this baby, she’s not a baby anymore, but my baby still treats her like a baby. She’s cute as a button of course, and we have my older son Shane, and he’s always getting in trouble, so we always give him a hard time. So my middle child, Annabelle, she’s pretty perfect, but it’s the middle child syndrome.” A Foo Fighters member revealed a ‘depressing’ paycheck earlier this week.