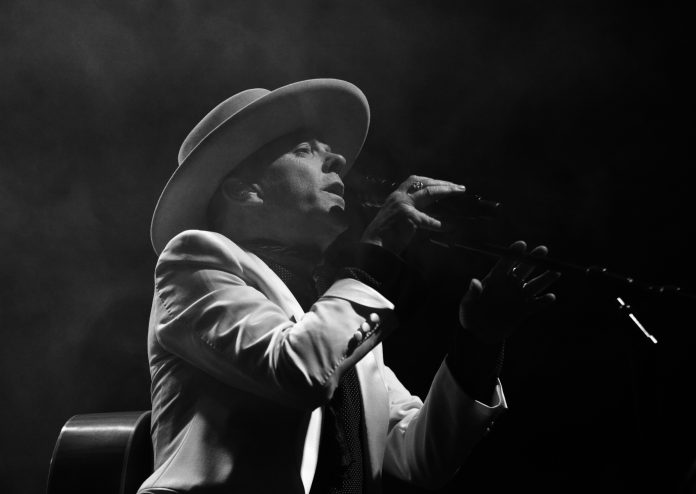 When Kiefer Sutherland tells a sold out Electric Ballroom that it’s good to be back home you could see some confusion on people’s faces. But he’s telling the truth and he explains that he was born just round the corner from the venue and that this show here in London, England really is a special homecoming one for him.

There is a genuine warmth in the air tonight and seeing Kiefer up onstage enjoying himself makes the world an okay place to live in again. There is of course the movie star side to him and the age group tonight are clearly forty somethings that grew up with his films. Sutherland certainly seems to realize this and at one point says “it must be so hard to come out and see me and not know any of the 15 songs on the set list.” It’s said with a little tongue in cheek but also Sutherland underestimates his musical influence as a lot of fans sing along to his songs and already know his material.

What is evident about Sutherland’s show is that him and his band are carefree but tight, and then you realize that they have been on and off on tour for over a year. The chemistry between the band is infectious and Sutherland feels at home on the stage, perhaps this was always meant to be his calling card? He’s a fine guitar player too and is happy to play up to his past musical heroes. He’s also a romantic, in fact it feels like Valentine’s Day, with Sutherland asking about the couples in the venue and telling the crowd that this next one is dedicated to the couples that have worked hard at maintaining their relationships. Sutherland’s gig is a mixture of rock/folk and country music, it’s easy listening and the venue adapts so well to the bands sound. He opens the show up with ‘Run To Him’ and follows that up with ‘Something You Love’ and ‘Reckless’. Arguably his most popular song with the crowd tonight is ‘Down in a Hole’ which sounds even better live than on the record and is sung just before the encore. There are some covers tonight too including Tom Petty’s ‘Honey Bee’ and Bob Dylan’s ‘Knockin’ On Heaven’s Door’.

What is clear is that Sutherland is having an absolute ball, not just tonight you sense but every time he hits a stage. He was born to perform and whether that is saving lives as Jack Bauer on 24 or just being himself in London with a guitar and a thousand people he always delivers the goods.