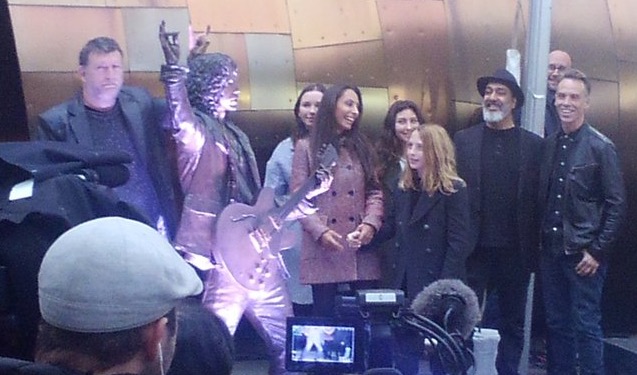 Soundgarden’s surviving members Kim Thayil, Ben Shepherd, and Matt Cameron attended the unveiling of the Chris Cornell statue at Seattle’s MoPOP Museum last month with Cornell’s widow and children. Thayil told Kerrang in a new interview that that felt ‘pride’ at the event, but that it was awkward as well.

“It was a lot of things. It was very surreal, for starters, but obviously a source of great pride to be able to honor our brother. It was awkward too, because there was a certain aspect of it that was a show, so it was a public event. Matt [Cameron], Ben [Shepherd], and I were onstage to some degree, which made us a bit uncomfortable. We, Chris included, were the guys who’d never turn up at the big events and parties, though we were always invited.”

He discussed his musical connection with Cornell in a new Vulture interview, “I think it was the way we connected musically. When we jammed together, we immediately started writing songs — it came pretty easy to us, and I think the interest in the material we were coming up with was enthusiastic and mutually appreciated. We liked the uniqueness and creativity we were sharing. We were coming up with progressive elements, and we liked to focus on emotive things and use chaotic elements — that’s what the band was about. We didn’t like traditional song-structure arrangements. We weren’t interested. Otherwise, I’d go do something else. I’d be a dishwasher.”