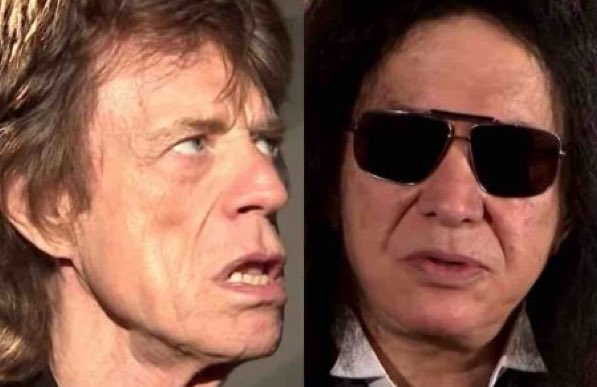 Gene Simmons claimed in a new Guitar World interview that The Rolling Stones frontman Mick Jagger and U2 singer Bono would ‘drop dead’ if they had to put on the gear KISS wear every night on tour.

“I’m 69. Still strong. Still look good. Still have hair on my head… although I have a lot more on my back now. But by the time this tour finishes I’ll be 72. So if I was in the Stones or U2 I could run around onstage in sneakers and a T-shirt and never break a sweat. And both those bands are great. But KISS is a different animal — we’re like heavy artillery. We’re armored.

I wear eight-inch platform heels and it takes hours to put on the makeup and the studs and all the stuff, and then I fly through the air with no net, shoot fire out of my ass, Paul flies off at the stage wearing 40 pounds of armor… We all love Jagger and Bono, but if they put in the amount of work we put in, they’d drop dead in a half hour.”

The interviewer quipped that Jagger and Bono are ‘lazy.’

Simmons responded, “I love them to death and respect those guys. But all they have to do is sing.”

He later said, “If Jagger has an off night, the Stones aren’t so good. But if I have an off night, I know Paul [Stanley]’s going to push it through to the goal.”

Gene Simmons also said on the Lipps Service radio show that Mick Jagger and Bono would be like ‘little girls’ and ‘fall down’ if they wore his onstage get up. They seem to be his favorite rockers to compare himself to.

“It’s always interesting marketing when you say, ‘I promise,’ and all that. KISS is the hardest-working band in show business — period. It doesn’t mean we’re the best, although we call ourselves that. But I wear about seven-inch platform dragon boots. Each one weighs 10 or 11 pounds. That’s 20-plus pounds on the legs. It’s like working out with bowling balls. Then on top of that, there’s another 30 pounds or so between the armor [and the rest of the outfit]. And so if you put [Mick] Jagger and Bono — [who are] both great — in my outfits, they’d… like little girls, they’d fall down… They can’t do this. And I’ve gotta spit fire and fly through the air and all that. It is physically exhausting… So the idea is go out with some dignity.”