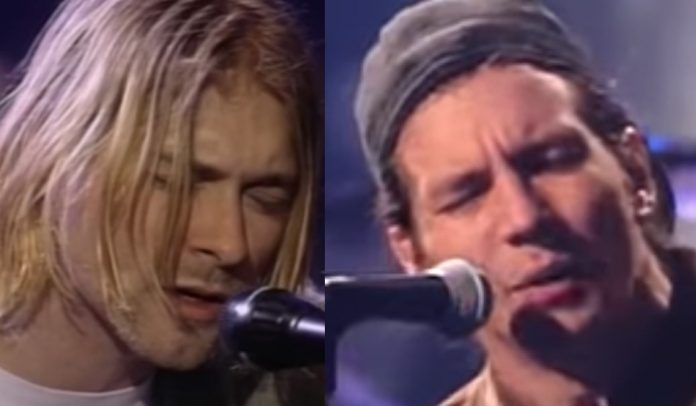 Happy Walters discussed Nirvana nearly appearing on the 1993 Judgment Night soundtrack, which featured Pearl Jam, in a new Rolling Stone interview. He said that Kurt Cobain was ‘difficult’ when it came to negotiations, while Dave Grohl and Krist Novoselic weren’t.

“I really wanted Kurt [Cobain] on [Judgment Night]. I really was a huge fan of Nirvana’s, and Kurt was the one that was difficult, not Dave and those guys.

Metallica said no. They were super pure and prissy in those days. See, in those days they were like the shit, the shit, right? They’ve obviously aged, and probably wish they would’ve done it. I don’t even know if it was Metallica. Some of the managers in those days were just dicks. Think about it, dude. I think this guy’s name was Peter Mensch, Metallica’s manager, he was like 45, was one of the biggest managers around, and here’s this 22-year-old schmuck calling and saying, ‘Hey, have you ever heard of Cypress Hill? They want to do a collaboration for a movie.’ And they’re like, ‘What? OK, give us a million dollars.’ It was ‘Fuck off, kid.’ So, some of that didn’t go well.

I wanted Public Enemy, and they were like, nah. They were fighting. It was a weird thing at the point, they were, at that time, [Professor Griff] was saying crazy stuff, it was anti-Semitic stuff, and all this.”

He also said, “Pearl Jam, obviously, I’d say, three or four of the guys were super into Cypress [Hill]. Eddie was kind of like, yeah, cool, chill, whatever, I’m gonna go surfing, type thing. So he was not against it, but just not super jazzed.”