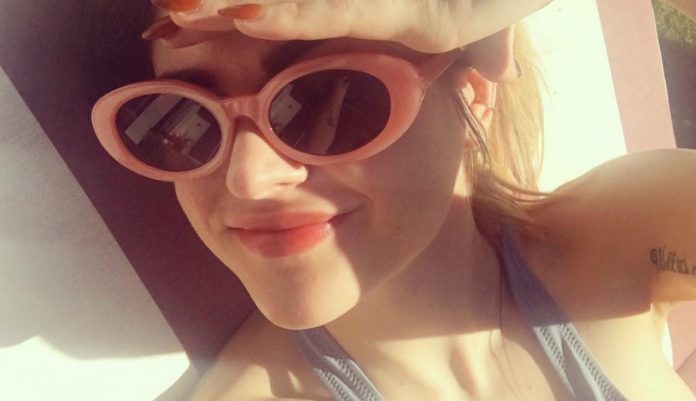 Frances Bean Cobain has traveled a lot this year, recently visiting Scotland with her mother. Her late father Kurt Cobain wanted to move to Scotland prior to his death. She also visited Ireland with her grandmother Wendy and aunt Kim. The Ireland visit was for the launch of the ‘Growing Up Kurt Cobain’ exhibit, and the Cobains were interviewed for the event.

Frances Bean Cobain said her father, Kurt Cobain, “wouldn’t have stood for” the current political situation in the United States at the Growing Up Kurt Cobain premiere event.

The event celebrated the opening of a new exhibition in County Kildare, which displays personal items that once belonged to Kurt Cobain.

“The violation of basic human rights that seems to be a prevalent theme in our country right now – I would like to believe that Kurt wouldn’t have stood for that or accepted that,” she told Reuters.

Cobain also discussed the taboos surrounding mental health and addiction. She has discussed her own struggles with both in the past, while her father also struggled with both before his suicide in 1994. “There is an association that is shameful and it shouldn’t be,” she said. “It’s taboo … despite the fact that it is present in our society every single day.”

“I think that in Europe it is a little less taboo,” she continued. “I think in America it is very frowned upon.”