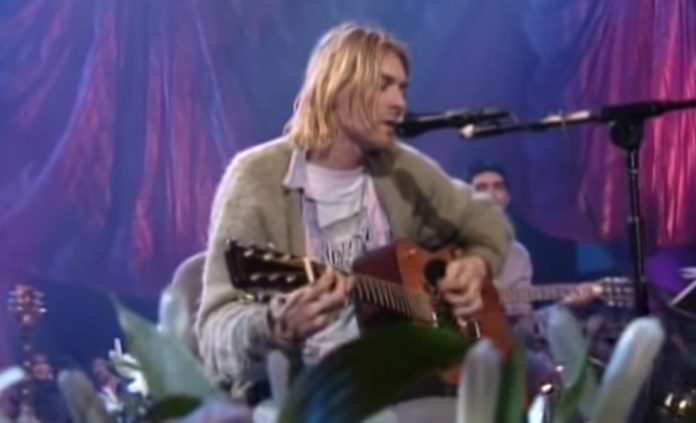 Kyle Meredith sits down with Joan Jett and Kenny Laguna for this Monday’s episode of Kyle Meredith With… on Consequence of Sound.

CoS write, “Jett discusses her experience fronting Nirvana at the band’s 2014 induction into the Rock and Roll Hall of Fame and her later collaborations with Dave Grohl. She explains the process behind her and The Blackhearts’ new single, ‘Fresh Start’, which can be found on the soundtrack to Runaways doc Bad Reputation, in addition to a group effort with Miley Cyrus and Laura Jane Grace on a cover of The Replacements’ ‘Androgynous’.”

Kenny: So his date was right, I think it was 1978. We knew Kurt, we knew Dave a little, we kind of met. Joan was producing Bikini Kill. Bikini Kill’s drummer, Tobi, was Kurt Cobain’s girlfriend.

Wikipedia reports that Vail met Kurt Cobain when he was hanging around with the Melvins in 1986. Cobain played guitar on one of the Go Team songs. Vail and Cobain briefly dated beginning in July 1990. The two discussed the possibility of starting a music project, and recorded a few songs together. Some of these songs ended up being Nirvana tracks. In October 1990 after Dave Grohl joined Nirvana, Hanna and Grohl started dating, making for two couples linking Nirvana to the new band Bikini Kill.