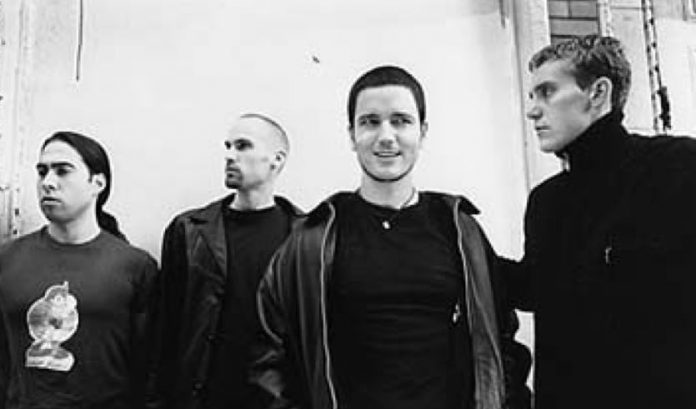 TMZ is reporting that Third Eye Blind frontman Stephan Jenkins is getting sued yet again, this time over royalties by the band’s former guitarist Kevin Cadogan. Cadogan played on the band’s first two albums before being fired in 2000 when he questioned Jenkins taking control of the band’s name, much like Axl Rose did in the 90’s with Guns N’ Roses.

Cadogan says he’s never been paid his cut from the band’s re-released debut album — and, as a founding member, he says he’s owed at least 25 percent of the profits. Kevin says he co-wrote and co-created the songs “Kiss Goodnight,” “Scattered,” “Heroin” and the band’s “Semi-Charmed Life.” All 4 are featured on the re-released debut, so he’s expecting to get paid for them.

Cadogan also says Jenkins cut him off from royalties on a slew of the band’s other hits. He’s suing for a court order establishing him as a copyright holder on all the disputed tracks, as well as an accounting on how much money the songs have generated.

Cadogan tweeted, “Didn’t expect the news to get out this fast.”

“My lawyer is great though and not afraid to go all the way to trial. He got a jury verdict against Jenkins in 2011.”

Wikipedia reports that The controversial circumstances of Cadogan’s departure stem from his allegations that Jenkins and he were to be partners of the corporation named Third Eye Blind Inc. Instead, Jenkins directed the band’s manager Eric Godtland and the band’s attorney Thomas Mandelbaum to issue Jenkins 100% of the shares to himself, making him the sole owner of all Third Eye Blind assets. Cadogan claimed that he was told by the band’s attorney that shares had not been issued to anyone. Cadogan told the New York Times in 1999 that he discovered 100% of the shares had in fact been issued to Jenkins as far back as 1996 when Cadogan and Jenkins signed the definitive record contract with Elektra. Cadogan states that upon learning that Jenkins owned 100% of the band he then refused to sign off on any more recording contracts and loans until shares were also issued to him. In 1999 Cadogan was asked to sign a $1 million loan from Elektra Records which would allow Third Eye Blind to record an EP and release it on its own label as a subsidiary of Elektra. Cadogan refused to sign the deal, citing the fact that he would not own or have any control over the assets acquired from the deal. In November 1999 Elektra Records issued the funds to the Third Eye Blind corporation without Cadogan’s signature as Elektra had previously required. Two months later in January 2000, Cadogan and Third Eye Blind parted ways after a concert in Utah. Despite having received the $1 million from Elektra in 1999, the band never delivered the EP for which the funds were allocated.[6] Cadogan filed suit, alleging wrongful termination, adding that his production, recording, and songwriter royalties were withheld since being kicked out of the band. The lawsuit was settled out of court in June 2002, with the terms of the settlement undisclosed.

A major point of contention between Cadogan and Jenkins was an original understanding that they were to be equal partners in Third Eye Blind, but Jenkins established Third Eye Blind Inc. on the eve of signing the band’s original record deal with Elektra Records in 1996. All payments were subsequently directed in the record contract to be paid to Third Eye Blind Inc., effectively cutting Cadogan out of any partnership and making Jenkins the sole “owner” of the band. Cadogan says several years went by before he realized that this change had been made in the contract.[citation needed]

In 2006 Third Eye Blind released A Collection on Rhino records. The collection included songs that were co-written by Cadogan from the first two albums. Cadogan was omitted from the band’s history in the biography section of the liner notes, and credit for his work was falsely given to his replacement guitarist, Tony Fredianelli. Jude Gold from Guitar Player magazine wrote in his review of the album that omitting Cadogan from the band’s history: “It’s like saying Guns N Roses music always profited from the interplay between Axl Rose and guitarist Buckethead.”

My lawyer is great though and not afraid to go all the way to trial. He got a jury verdict against Jenkins in 2011