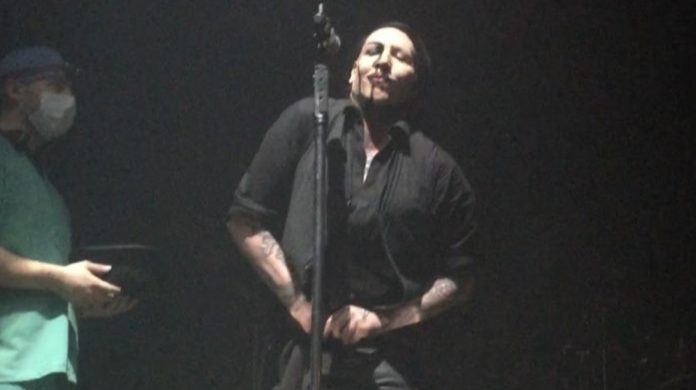 Marilyn Manson has canceled his performance Thursday night at Budweiser Stage Toronto in Toronto, Ontario, Canada. The show was part of the shock rocker’s “Twins Of Evil: The Second Coming” tour with Rob Zombie, which kicked off earlier in the month.

The cancelation was confirmed in a message on Manson’s official Twitter account. It read: “Due to unforeseen illness, Marilyn Manson will not be performing tonight in Toronto, ON.

“If you were in attendance specifically to see Marilyn Manson, your tickets will be available for refund at point of purchase.

“Rob Zombie will perform as scheduled.”

In unrelated news but important news for Marilyn Manson fans who attended the show and might have seen something, Syracuse.com reports that deputies are seeking the public’s help in finding the driver of a dark colored sedan that hit a pedestrian in the parking lot of St. Joseph’s Health Amphitheater at K-Rockathon on Sunday, according to the Onondaga County Sheriff’s Office.

The crash happened at 11:08 p.m. in section F of the Orange parking lot after Marilyn Manson and Rob Zombie performed, deputies said. They found a 31-year-old man who had been hit by the car, which fled before first responders arrived, deputies said.

The man suffered “serious injuries” and was taken to Upstate University Hospital, where he is currently in stable condition, deputies said.

Witnesses described the car as having front driver side damage and was later found abandoned in Cayuga County, deputies said.

Deputies are asking for people to call the sheriff’s office tip line at 315-435-3051 or by sending an anonymous tip via Tip411.