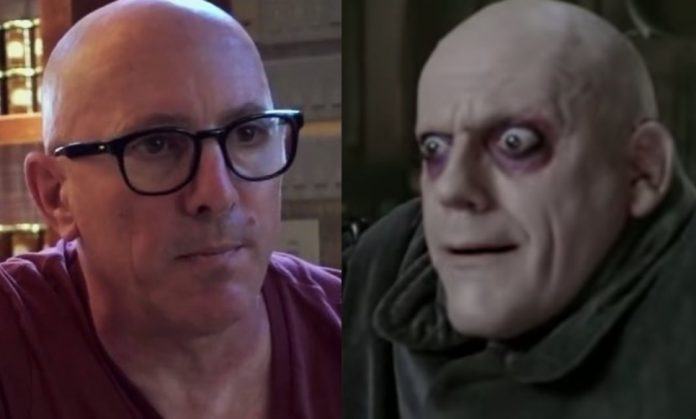 Tool and A Perfect Circle frontman Maynard James Keenan shared a hilarious photoshop of the cover of APC’s new album Eat the Elephant. The photoshop sees Uncle Fester from the Addams Family on the cover in place of Keenan and Howerdel.

Maynard tweeted, “Heh. #comedyfirstandalways. I spit coffee out my nose.”

Billy Howerdel responded, “Question is: what took so long?”

A Perfect Circle’s Eat The Elephant, the Maynard James Keenan and Billy Howerdel led rock band’s return release following a 14-year gap between new albums, debuted atop numerous Billboard charts, grabbing the #1 spot on the Rock, Independent and Alternative Albums’ charts, a #2 entry on the Top Current Albums chart (for pure album sales) and a #3 album debut on the Top 200. This is the band’s fourth consecutive studio album to have Top 5 debut on the Billboard Top 200.

The band kicked off release week with a rare fan forum, taking questions via a live-streamed Q&A from Las Vegas, which was followed on Monday by a “Jimmy Kimmel Live!” performance of “TalkTalk” (https://youtu.be/qxJYt4cUrcA) and “So Long, And Thanks For All The Fish” (https://youtu.be/_D8am-EZmY0). In the midst of the release week activities, the band also announced a new round of tour dates for both the U.S. and Europe (dates below).

While Eat The Elephant was made available in the traditional incarnations (digital/CD, various vinyl colorways), it received a special treatment as part of a deluxe box set, with Sundance award-winning filmmaker Steven Sebring (“Horses: Patti Smith and Her Band”, “Dream of Life”) creating the world’s first hologram album. The 58-minute hologram, which unfolds through the eyes of a young girl over the 12-song album arc, reveals itself when fans place the prism on their smartphones and enter a special code. The box set can be ordered via the A Perfect Circle store (https://aperfectcircle.lnk.to/ETEBoxSetPR).

“Having Maynard and Billy’s trust to create this for A Perfect Circle was a true artist’s dream,” said Sebring. “Their 14-year break allowed technology to catch up with their groundbreaking music and gave me the chance to apply new ideas of dimensional capture to this stunning album.”

May 18 Columbus, OH Rock on the Range

May 22 Birmingham, AL Legacy Arena at the BJCC