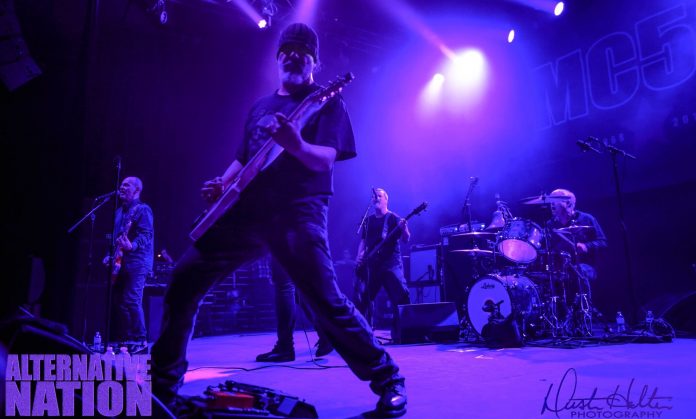 Review written by and photos by Dustin Halter

As the second generation of rock pioneers begin celebrating their half-century long musical tenures, there are few that can still boast their original lineups. Thanks to zealous founding members like Mike Love of the Beach Boys, who’ve had 50 different members in the band from the early 1960’s to current day, the music of such monumental bands have been kept alive over the years. No matter who else is on stage, Mike Love, God bless him, still goes out there and plays Beach Boys songs for the masses.

Well that may be fine for the Beach Boys, but a real rock band needs a rock solid foundation. A platoon of veteran musicians you can count on to ”bring it” to each and every show. With that in mind, for the MC5’s 50th anniversary of “Kick Out The Jams,” Wayne Kramer has put together a brutal touring band using some of the 90’s most prolific rock musicians. Kim Thayil, formerly of Soundgarden is on guitar, opposite MC5 OG, Wayne Kramer. With Brendan Canty of Fugazi fame on drums and Billy Gould from Faith No More on bass. Marcus Durant from Zen Guerilla is on vox, going above and beyond in giving tribute to the late MC5 lead singer, Rob Tyner.

The MC5, or the Motor City 5, was formed by an 18 year old Wayne Kramer in early 1960’s Detroit. Well-known for their energetic and eclectic sound, the band converged on themes from garage, blues, and psychedelic rock. 2018 marks the 50th anniversary of their hit album, Kick Out The Jams, known best for its eponymous track, Kick Out The Jams, as well as Ramblin’ Rose, and Come Together. The energy & style of MC5 inspired many bands of the grunge era, including Mudhoney, Soundgarden, and Green River, with Kick Out The Jams being paid homage by many rock bands in the 90’s. You can find some great covers of it by Mudhoney, Pearl Jam, Presidents Of The United States Of America, Rage Against The Machine, and Jeff Buckley.