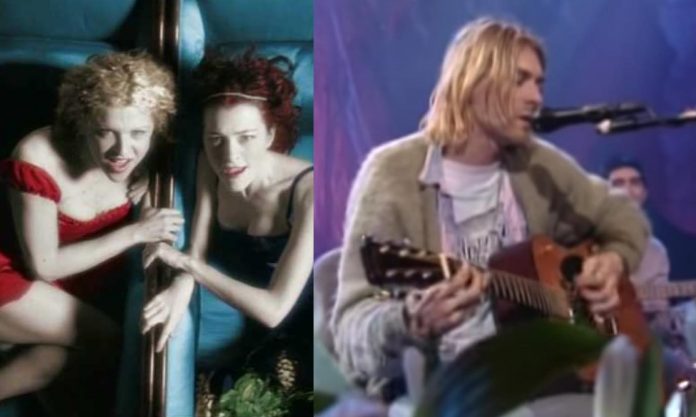 Former Hole bassist Melissa auf der Maur was recently interviewed by Stereogum to discuss organizing an event honoring Courtney Love called ‘A Tribute: Celebrating the Magic and Power’ on October 27th in Hudson, New York. She also discussed the 20th anniversary of Celebrity Skin. She unloaded on the debunked conspiracy theory that Courtney Love had Kurt Cobain murdered, and defended her ex-bandmate.

“I know, it’s so exciting. It’s exciting for me to finally, 10 years into this chapter, connect the two worlds. It took a while. I’ve never been one for reunions and I’ve never jumped at that opportunity when Hole have brought it up or there have been invitations to do so. But I had a revelation, really simple. It’s the 20th anniversary of when I left Hole, when we put out our last record. Next year is the 25th anniversary of Live Through This. We have, until now, not done reunions.

Honestly, the event that we’re honoring Courtney with, Pioneering People, we did it once with John Waters, once with Rufus Wainwright. Earlier this year I realized it’s gotta be a woman. So it occurred to me, well, Courtney’s a pioneer. And Courtney deserves a creative bouquet of honoring. She’s one of the most misunderstood, wild card, strange individuals, and Hole’s legacy is important to me, as far as it being looked at with the respect it deserves and the impact it made. The impact is very real. The #MeToo moments, Courtney was always saying this stuff.

They just wrote her off as a crazy bitch. That’s not OK. In the ’90s, there was much less of an understanding of how complicated people are complicated for a reason and they deserve a lot more compassion. I watched her be burned at the stake. How many people get accused of murdering their husband when they’re left with their daughter? It’s just unacceptable. I’ve always defended her in terms of any of that negative stuff.”