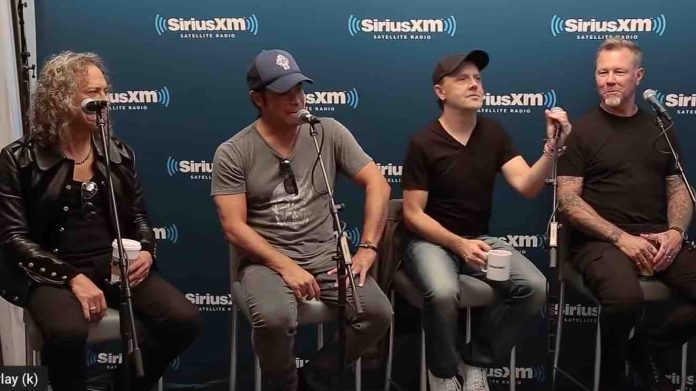 Metallica guitarist Kirk Hammett has shared a photo of bandmate Robert Trujillo falling down during a rehearsal performance. Metallica are set to continue touring throughout the rest of 2019.

He wrote on Instagram, “Warming up jet lagged with @robtrujillo #metinlisbon @metallica photo cred to @rosshalfin 🤘📷🤘”

Lars Ulrich has written on Instagram, “If you live in San Francisco or NorCal, do yourself a favor and go see The Jungle, an absolutely unbelievable play and totally extraordinary immersive experience.

The true story of events that unfold at a migrant camp in Calais, France in 2015,
we see how several different cultures come together with equal parts love, compromise, respect and sheer humanity to fight the adversities they endure.

I have never seen anything quite like it, truly unique. WOW!

He also wrote, “Getting closer ….Almost close enough to grab it!!
Three days boys and girls and the European tour will be in full effect. Kickoff and theme is Lisbon…today’s snap is from Super Bock Super Rock @ Parque do Tejo on June 28, 2007.
#wanna #worldwired #MetInLisbon.”