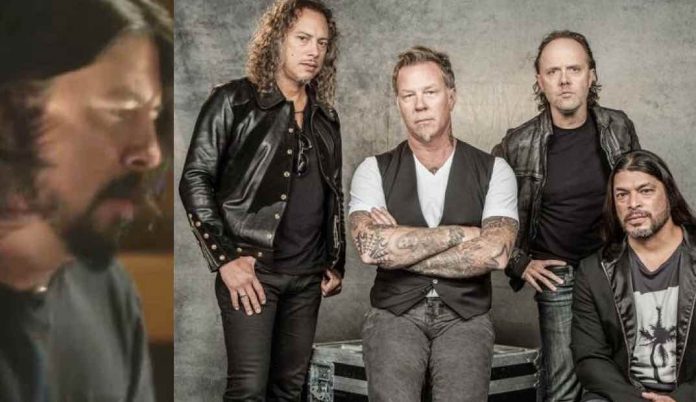 Foo Fighters frontman Dave Grohl has confirmed that he is making a new movie called ‘What Drives Us’ with Guns N’ Roses, Red Hot Chili Peppers, Metallica, U2, and other big names. Metallica revealed a sad Dave Grohl secret last year. Grohl made the announcement on Letter To You Radio on Apple Music Hits with Bruce Springsteen. Alternative Nation transcribed Dave and Bruce’s comments.

Dave: I just made this documentary called What Drives Us, and it’s about bands and their early beginnings, the inspiration, the process of going from a kid who loves music, to a kid with an instrument, to a kid with his friends, writing songs. And then, how do you deliver it to the people? Once you get it together, you’re like, all right, let’s go out and let’s deliver it to the people. Maybe it’s the corner bar.

Then you get a gig in Baltimore, so now you’ve got to drive. So, what are you going to get in? All of you are going to pile in some shitty, old van, and you got your sleeping bags, and you’re sleeping on floors, and you’re eating corn dogs, and you’re just trying to get enough gas money to get to the next city.

And you’ve been there, everyone’s been there. And that’s the thing is, I think that, I interviewed everyone from Flea from the Chili Peppers, and Lars from Metallica, and Edge from U2, and Slash and Duff from Guns N’ Roses, and Ben Harper, and St. Vincent, and all these different musicians.

Bruce: Well, you’re right. Because it’s funny, what is the first thing that we do when we get back together after not having been together for a year or so? We tell old stories. “Hey man, do you remember, the night [inaudible] and the bus, and the shit came out of the frickin toilet.” The first thing you do is you start to tell old stories, I guess to remind you of that bond. And then you pick up, and you take off from there.

But you’re right, if you’ve survived those early years of that kind of experience, particularly your youthful years, when you were in your 20s or even early 30s, it’s something, it’s forever, my friend. No matter what comes between you, or what happens, it’s just forever. And so, it is lovely, we get the guys together, and I don’t think I’d written a song, an actual band song in about six or seven years. And you’re always at a place where you’re going I don’t know, do I have any more of those inside of me?

I know I have music inside, but I’m not sure if I have that kind of music inside of me right now, or in the foreseeable future. And so, sort of, I’m lucky enough to come up with most of it in a short period of time. And then to get the guys in, and just all of a sudden, you’re re-inhabiting all the roles that you play in each other’s lives. And you’re bringing something new to it, so you’re creating a new chapter as you were paying due and honoring all the work you’ve done together in the past. It’s a blessed experience.