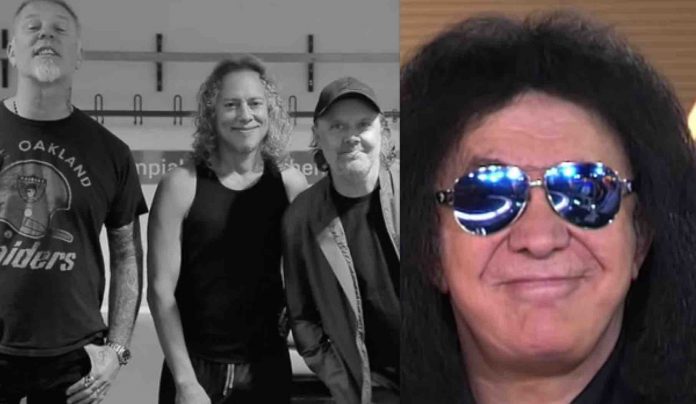 Metallica guitarist Kirk Hammett has posted a photo of himself contemplating playing a KISS pinball game.

“To play or not to play … that is the question. #pinballwizard #kiss @sternpinball”

Queens of the Stone Age drummer Jon Theodore commented, “Not as good as the @metallica game TBH.”

“You can play it, but the only sound effects are Gene telling the player how he’s the best businessman ever.”

“After obviously playing the Kiss pinball you also need to make sure to play the WrestleMania pinball next to it.”

Hammett recently wrote on his Fear Fest Evil blog, “Finally, moving away from movies, I wanna tell you about two new pieces which will be at the upcoming Royal Ontario Museum exhibition of my It’s Alive! Collection.

The first is a Dracula one-sheet poster I’ve been trying to find ever since one was found in the ‘90s. Before it was found in the ‘90s, the only picture we had was in black and white. And when I saw the full color version from 1931, I thought it was the best Dracula poster there is. A couple of years ago I was lucky enough to pick one up, and I’m really, really, really excited because it fills out my collection in a way I’ve been meaning to fill it out for a long time. I’m very happy about it, and there will be a guitar graphic in the future.”