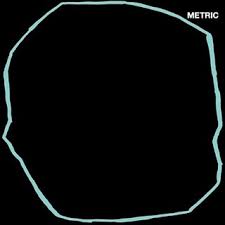 “We’ve been so honored to open for The Smashing Pumpkins this tour! We’re Metric and this is our last song! Thank you everybody!” announced Metric lead singer Emily Haines as the band launched into their final song of their set at the Infinite Energy Arena in Duluth, Ga. back on July 22nd of this year. The cheers were scattered and loud, but unfortunately were the kind of cheers meant to celebrate the fact that Metric was about to end their set, than in response to the thank you she just offered the crowd, and the amazing set they just played. The majority of the crowd most likely had no idea who they were, to their own detriment. Metric put on a full volume rock show that night opening for The Smashing Pumpkins, and set the stage nicely for the night’s main attraction. Personally, I was only slightly less excited to see them on stage as I was The Pumpkins…well, maybe that’s an exaggeration, but being a fan of Metric for about 10 years, and being aware of their new (at the time) singles “Dark Saturday” and “Dressed to Suppress,” and how rocking they were compared to their most recent releases, I was really interested in seeing them live. They didn’t disappoint, and like their newly released album Art of Doubt (of which the aforementioned singles were at that point an excellent harbinger of what was to come), they totally rocked.

Art of Doubt is a return to a more discernible rock sound for the band that echoes their 2009 album Fantasies, but plays as even more raw than that album did. Synths and electronic blooms are always going to be part of the Metric sound, but here they accentuate the songs instead of drive them. Guitarist Jimmy Shaw’s playing rises to the top of the mix here in opposition to the bleeps and bloops. Album standout “Underline The Black” displays a guitar rock sensibility that recalls the alt-rock of the 1990’s as opposed to that of the 2010’s. Undoubtedly, Billy Corgan noticed this, and saw how well Metric would work as an opener on their Shiny And Oh So Bright Tour 2018.

Or maybe he is just a big fan. I think that can be confidently assumed. “Now or Never Now,” which the band didn’t play, would have made an excellent entry into Metric’s set list that night. It’s the perfect Metric song. Haines’ vocals here are a powerful as they ever were, along with her lyrics, and the live drum, guitar, and bass work meld perfectly with the synth breaks that break like rhythmic waves throughout the song. It’s loud, anthemic, and perfect for filling up arenas with its sound. Perhaps we’ll be lucky enough to hear it live when Metric get back on tour in the US in early 2019.

Album title track “Art of Doubt,” is one of the hardest and heaviest songs that Metric has ever written. It’s also a perfect example of the type influence that the loud/quiet dynamic that powered so many of the 1990’s alt rock titan bands (like The Smashing Pumpkins) has had on the second generation of contemporary alt-rock bands. “Art of Doubt” is not only an album defining type of song, it’s a band defining type.

Metric has always been the type of band that seemed to vacillate and not exactly know what it wanted to be musically, but here on Art of Doubt they erase all doubt on what they are. They are a talented alt-rock act that just released its best album to date barely a decade into their recording career.