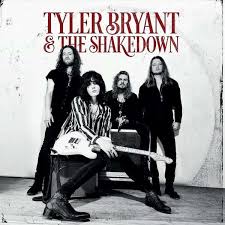 Nashville is producing tremendous talent for the rock scene these days. Another example of that is Tyler Bryant & The Shakedown. Tyler and Caleb from the band joined the DOMKcast. Young, energetic and enthusiastic band with a classic blues rock sound. They’ve toured with some big names in the industry like AC/DC, Jeff Beck, Eric Clapton, Guns N’ Roses, Aerosmith and more. What have they learned from these heavy hitters in the industry? Tyler says “The way that the band interacts onstage. Every aspect of those massive live performances are something that can be learned from for all of us. I think we’ve soaked up a lot. I always equate it to going to Rock N’ Roll college.” A tremendous reference for the do’s and don’ts of the stage which Tyler and Caleb have taken to heart.

Speaking of Aerosmith, rock royalty is apart of this young up-and-coming band. Graham Whitford, son of Aerosmith guitarist Brad Whitford joined Tyler Bryant & The Shakedown to follow in the same footsteps as his dad. Tyler tells the story of how he got connected with Graham. “We were up in New York City doing a radio interview doing a radio interview and a mutual friend had drug Graham out. Introduced him as the guy who’s going to put me out of a job because he was a hotshot guitar player. Caleb and I were immediately thrown off by Graham. We were like I don’t know man. Kinda keeping him at arms length. Then we heard him play and we were like oh, we gotta have this guy in the band. So I shot him a note and said you should move to Nashville and be in our band. We just became best buds and downhill ever since.”

The band resides in Nashville which is rich with rock talent. Tyler spends time fishing in his down-time with the Halestorm crew. He says “Lzzy and Joe I love those guys and they don’t live too far away and Joe always fishes me under the buss but we have a good time.” Tyler Bryant & The Shakedown on the road right now. See them in a city near you and listen to the full conversation that Lunchbox and Promo Brady had with Tyler Bryant and Caleb from Tyler Bryant & The Shakedown on the DOMKcast.

Listen to “DOMKcast with Tyler Bryant & The Shakedown” on Spreaker.

New episodes available every Friday afternoon at 2pm on the iHeartRadio App. #DOMKRocks