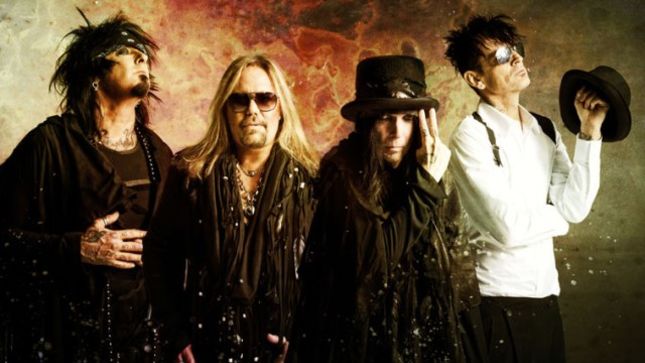 Motley Crue bassist Nikki Sixx has uploaded a photo of himself dressed as a woman from his early days in rock and roll. He wrote on social media, “The 70’s with my old band London. Innocent times with a belly full of fire spitting sarcasm. I’m not sure if we were laughing at ourselves or you. RIP my brother Lizzie. #RocknRoll #punkrock #glamrock #HOLLYWOOD. Don’t take time for granted. It’s goes by like a flash of the eye.” Mick Mars called out a Motley Crue fraud earlier this week.

katie_kastel commented, “Ahh! Such great times! Yes typical what you said & so true “Innocent times with a belly full of spitting sarcasm” Couldn’t have said it better myself!🤔 As for your comment on not taking time for granted. Boy! I’m in complete agreement with that! Especially now! Thanks ☮️✌️🎈”

rfd240 wrote, “Yeah unfortunately going to my nephews wake/funeral today. Lost his battle with the beast. As his son did earlier this year. (heroin) too soon ….too young.”

A Motley Crue icon revealed a massive drug payment earlier this week. stormwind74 said, “Probably laughing at both… 🙃 make-up has been on your list since then for quite a few years more… RIP Lizzie…”

jaequinn_ chimed in, “Can someone please tell me why it took me so long to recognize Nikki? Also, Nikki is a wayyyyyy prettier girl than I’ll ever be 😩”

jarjon76 said, “For some reason I thought of Queen’s I Wanna Break Free video.”