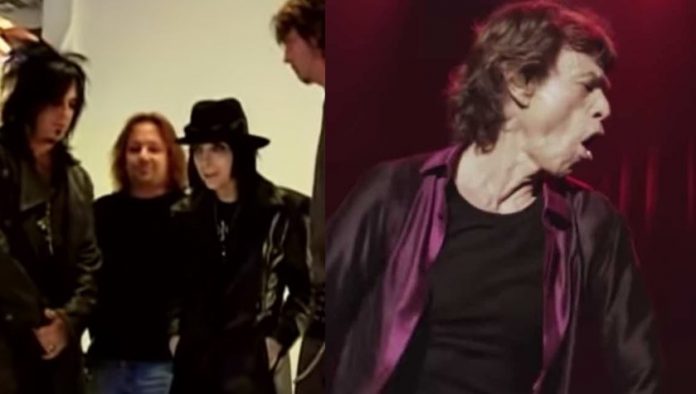 Motley Crue bassist Nikki Sixx recently revealed that the close up of Vince Neil’s crotch on the cover of Too Fast For Love was based on The Rolling Stones album Sticky Fingers, which appears to depict a closeup of Mick Jagger‘s private areas, though it’s been disputed if a model may have posed in his place. Andy Warhol was responsible for the Sticky Fingers cover. Motley Crue have been in the news with ‘The Dirt’ biopic, with Marilyn Manson recently offering his bold take.

A fan asked asked Sixx, “Why did you go with Vince’s crotch for the cover of Too Fast For Love album?”

Album Cover Joe reported about The Rolling Stones album cover, “The piéce de resistance was the inclusion of a working zipper on the album cover, taking you to the inner sleeve where the guy can be found in his jockey shorts. (One of my pre-adolescent homoerotic memories involves standing in the record section of my small town department store, my heart beating the requisite mile a minute, as I feverishly scanned my surroundings and anxiously waited for just the right opportunity to unzip those pants and see what was inside without getting caught.)

There has been plenty of debate about the identity of the crotches in question. The only thing anyone can agree on is that the man on the inside sleeve is not the same as the man on the front and rear cover. The best evidence is that Glenn O’Brien is the jockey shorts model. The guy on the outside has been guessed at variously, but has often been rumored to be Joe.

Joe says it is him. ‘It was just out of a collection of junk photos that Andy pulled from,’ he tells me. ‘He didn’t pull it out for the design or anything, it was just the first one he got that he felt was the right shape to fit what he wanted to use for the fly. It had nothing to do with anything else. There was no photograph session set up where they were taking shots of crotch areas.’

The debate rages on because Joe can’t prove that he’s the guy and not everybody believes him. In the book The Warhol Look, the album cover appears on the same page as photos of Joe. ‘See,’ Joe says, ‘even they’re getting closer to finally acknowledging it.'”

Based on Sticky Fingers